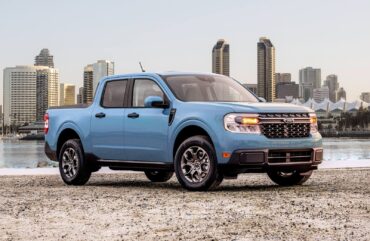 Overview: After years of no one making compact pickups, suddenly, they’re a thing again. Launched last year, the Ford Maverick compact pickup features both a hybrid and gas-only model, and won Kelly Blue Book’s 2022 Best New Model in its Best Buy Awards. The Maverick can easily be an everyday or work truck — both on- or off-road. Pricing starts at just over $22 grand and compares well with the competition — basically the Hyundai Santa Cruz — at $25,450.

Walkaround: Called a super crew by Ford, the Maverick features what most folks call a crew cab because of its four doors. It has a 4.5-foot bed — the only choice — which is part of the overall body, not separate, because the Maverick is built on the same unibody platform as Ford’s Escape and Bronco Sport SUVs. The bed’s load height is a low 30 inches and includes a spray-in liner plus 10 tie-downs and locking rails. There’s also the option of a 110-volt outlet and closable compartments on either side. A Black Appearance package is new for the 2023 XLT and Lariat trims, and the Tremor Off-Road and Tremor appearance packages are also offered. 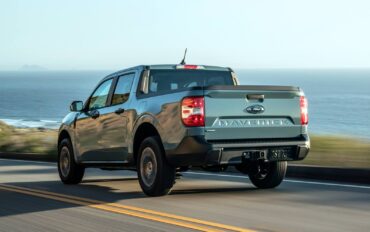 Interior: With two rows of reasonably comfortable seating, the Maverick is versatile and obliging. The front row of our XLT test driver featured cloth buckets with an eight-way power driver’s seat. The second row, a flip-up bench, exposed storage spaces underneath. However, the hybrid version hijacks one of those for its battery and reduces rear legroom by an inch. The Maverick features an 8-inch infotainment touchscreen, six-speaker AM/FM/XM Satellite radio and FordPass Connect with a 4G WiFi hotspot, along with Apple CarPlay and Android Auto. There are all the usual power options — windows, mirrors, door locks, a tailgate lock and remote keyless entry and starting. The doors can hold large water bottles; however, there is lots of unpadded hard plastic throughout the interior, which kind of cheapens the overall look, but doesn’t detract from any functionality.

Behind the wheel: A hybrid drivetrain is standard in the Maverick; however, our test driver featured the nonhybrid 250-horse, 2-liter turbo. Our test driver wasn’t all-wheel drive (AWD), which requires this more powerful nonhybrid drivetrain — and adds another $2,220 to the sticker. The turbo delivered enough muscle to easily hit freeway speeds, while maximum towing capability is 4,000 pounds. Using the tow/haul or sport mode also allows the driver to stay in one gear longer, accessing the most power. Even though it’s a compact truck, the Maverick handles and drives as well as any small SUV — no surprise considering the siblings it shares its platform with.

Bottom line: New compact pickups are pretty rare, and the Maverick’s only real competition is the Hyundai Santa Cruz. However, the standard hybrid drivetrain puts the Maverick in a class by itself.