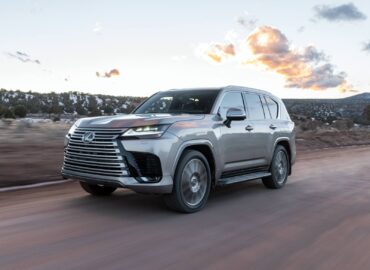 Overview: The Lexus LX 600 is Toyota’s luxury brand’s biggest and most luxurious SUV ever. It underwent a full makeover from the lugnuts up for 2022 — including a badging change from LX 570 to this year’s LX 600 to compliment the advanced engineering that makes it more capable than ever. The LX 600 rides on a chassis it shares with the new Tundra full-size pickup. Under the hood is a turbocharged 3.5-liter V6 that delivers 409 horses with 479 lb.-ft. of torque. Both numbers are way up compared to the previous powerplant — as is EPA-estimated fuel economy. 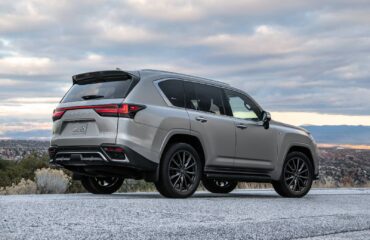 Interior: The LX’s interior is exceptionally roomy and quiet, but sacrifices versatility without a third row. The cabin has lots of controls — both physical and touchscreen — including those for off-road features. The previous finicky joystick controller is replaced with dual touchscreens — a huge improvement. It also finally offers USB ports for second-row passengers. The center console is large, with abundant small-item storage. The heated and cooled front seats are wide, cushy and comfortably supportive. They’re more like armchairs than car seats and are terrific on road trips. The driving position is tall, upright and commanding, although shorter drivers may find it problematic. There’s several different ways to configure the LX 600’s seating. The most notable is a new trim level called Ultra Luxury, which was our test-driver. Ultra Luxury swaps the second-row bench seat for two six-way-adjustable captain’s chairs and a full center console between them. They feature a touchscreen that controls seat position and a new massage function, and doubles as an entertainment screen. The right rear-passenger seat reclines to an almost flat position so you can potentially take a nap. That’s serious executive cruiser-style luxury. Reclining the second-row passenger-side seat makes you feel like you’re seated in business class on a transcontinental flight. Visibility is excellent thanks to glass, expansive mirrors and cameras that provide a clear view all around. The LX 600 offers 41 cubic feet of storage space behind the second-row and can tow up to 8,000 pounds. Both are average for a large luxury SUV and less than some competitors.

Behind the wheel: The ride is smoother than the previous LX 570, but handling hasn’t really improved, compromised primarily by the vehicle’s 6,000-pound weight and sheer size. Lexus’ height-adjustable suspension smooths out bumps, but feels somewhat floaty at freeway speeds. The turbocharged V6 dispenses all the power needed and the 10-speed automatic delivers smooth shifts. Steering is heavy and kind of numb, but the LX 600’s main strengths — besides interior luxury — lie primarily in its off-road capabilities, which are impressive. We found this out at Mudfest, the Northwest Automotive Press Association’s national off-road competition event, where it performed as well as anything there.

Bottom line: This is an impressively built piece of machinery that checks all the luxury boxes, utilizing top-quality materials inside and out and boasting serious off-road chops. While there’s an awful lot to like — and enjoy — in the LX 600, the six-figure price, value and personal usage have to be serious considerations. And there’s always Toyota’s legendary reliability.