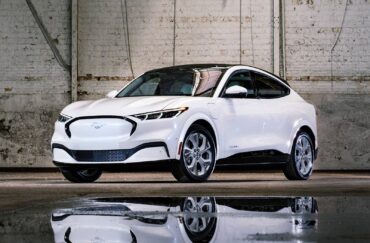 Overview: We’ve all heard the ad nauseum buzz about Ford’s Mustang Mach-E — the electric crossover sport-utility vehicle. In our view, calling this a Mustang is an aberration that cheapens the storied Mustang brand. There’s never been a four-door Mustang or SUV, much less an electric. Ford should have given the Mach-E its own identity. That said, this is a vehicle with sharp design, strong performance, technology that works, extensive safety systems and decent range.

Walkaround: The Mach-E boasts some traditional Mustang styling cues — like twin LED headlights wrapping around to meet parallel body lines running down each side, with the upper body line meeting Mustang’s signature sequential turn signals. The front fascia features a blank oval grille with a galloping pony slapped on. There’s no grille since electric motors require no air. The Mach-E imitates other crossover coupes with its sloping roofline and integrated roof spoiler. There are no door handles — just push-buttons that pop them open about an inch, until pulled fully open via a window-sill lip. 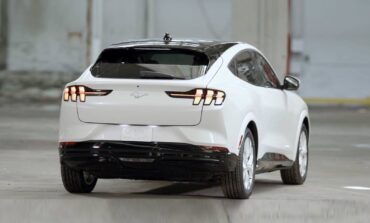 Interior: The cabin is not like any other Mustang — ever. It seats five with nearly 60 cubic feet of space with the 60/40 rear seats folded. The high roofline offers plenty of headroom. A 15.5-inch center-mounted vertical touchscreen dominates the dashboard. It controls driving and vehicle preferences, while featuring three category layers, with climate controls fixed at the bottom. The upper two categories are customizable for viewing things like navigation and other commonly used functions. The instrument panel also showcases a smaller 10.2-inch-wide digital gauge bar displaying tons of information. Best of all, everything works flawlessly. The Mach-E also pairs with smartphones for wireless charging, to use as a key, and to monitor the vehicle, among other things. The front seats are comfortable — however, the driver gets an eight-way-power seat while the passenger gets a four-way manual seat. An optional surround-view camera system helps the cabin’s limited rear visibility.

Behind the Wheel: The Standard Range Mach-E comes with a 68-kwh battery, but two battery choices and three power outputs are offered. All-wheel-drive Mach-E’s have a second motor to power the AWD, which adds about 200 pounds of battery weight, while raising the combined horsepower and torque ratings to 346 hp and 428 lb.-ft. The range is rated at 230 miles, but the best we got was 211. An extended-range power pack is available for AWD although AWD reduces the overall range. However, with all-wheel drive, it compromises the least tradeoff between range and quickness. The two-motor AWD versions not only have more power, but also handle differently. The regenerative braking has two modes — one so aggressive, it brings the vehicle to a stop without the brake pedal being applied. Overall, with rear- or all-wheel drive, the Mach-E benefits from its low center of gravity and handles more like a sports coupe than an SUV.

Bottom Line: The Mach-E is an impressive piece of engineering. The more you spend, the better it gets — in theory. But it will never be a “real” Mustang.