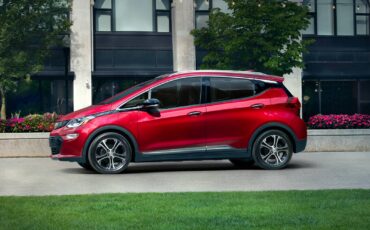 Overview: Electric Vehicles (EVs) are hailed as the future of the automobile, and manufacturers are gearing up for building them in a huge way. And the 2020 Chevy Bolt makes a strong argument for EVs at least being practical as a second vehicle, and local, daily driver. However, until battery range improves to somewhere near 500 miles, with much shorter charging periods and charging infrastructure commonplace, EVs aren’t going to replace internal combustion powerplant cars as primary vehicles.

Also going against them is that except for the Tesla, Model S and Audi e-Tron, EVs generally aren’t large enough to comfortably accommodate a family on a road trip. That will change over time as infrastructure grows, and manufacturers bring more models to market. But right now, EVs are basically in automotive Purgatory.

Like the Nissan Leaf, the Chevy Bolt makes a strong argument for practical commuting — especially in places like the environmentally-conscious, gridlocked Pacific NW where sitting in barely moving traffic for an hour or more a day — each way — isn’t uncommon. However, holding EVs back from conventional use is basic affordability and lack of range. 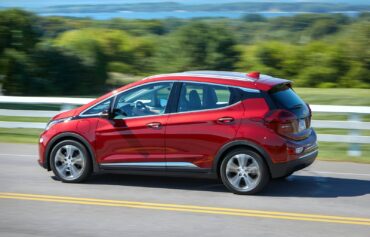 The Chevy Bolt was designed to be an affordable EV, and is improving in range, with a 10 percent boost in battery capacity. The Bolt is now EPA-rated for a range of 259 miles.

The Bolt EV comes in two trim levels, LT and Premier. Our test-driver was the Premier and this review will focus on that model.

Walkaround: Despite its curvaceous profile, the otherwise boxy Bolt looks almost minivan-like from afar. The Bolt employs a few tried and true design tricks — like pushing the wheels out to the corners, adding a wedge-like beltline and “floating” roofline to make the roof appear to visually “drop” toward the rear. In reality, close up, it’s basically a tall, short, small, boxy little economy car dressed in a curvy topcoat.

Interior: While the Bolt is relatively quiet and comfortable — as well as space efficient — it’s still an economy car inside. There’s an excess of plastic that screams economy-car, with drab shades of hard, plastic surfaces efficiently within reach of the driver.

It can fit four adults inside and handle five, with excellent seating space. But seat comfort is an afterthought, with short cushions, thinly padded backrests, and upright seating positions that are fine on short jaunts, but lack support for longer trips.

The high dashboard reminded us of a minivan’s control stack, but centered on the dash is a large, 10.2-inch infotainment touchscreen that’s pretty intuitive and lag-free. Our Premier test-driver featured a surround-view camera system and a rear camera mirror.

Behind the rear seats is 16.9 cubic feet of cargo space — more than some large sedans. With them folded down, it’s 56.6 — rivaling many compact crossover SUVs.

Behind The Wheel: The battery-powered Bolt features strong acceleration and, holds the road well, with good handling. It rides like a bigger vehicle thanks to the heavy, flat battery pack located low in the floor, which helps with stability.

However, the Bolt EV drives pretty much like any other compact car — only heavier at nearly 3,600-pounds. It does the 0-60 drill in less than seven seconds — quicker than most high gas-mileage crossovers and sedans.

Chevrolet claims that the Bolt can recover 100 miles of range in 30 minutes of DC fast charging. A full charge at Level 2 (240-volt) takes about 10 hours. A DC fast-charging port is optional — and a smart addition. Chevy’s Energy Assist feature helps drivers locate nearby charging stations.

Bottom Line: Except for the much more costly Tesla, the 2020 Chevy Bolt leads the EV pack in range. However, $41,000+ for the lowest priced Bolt, is still about $10,000 more than a comparable Nissan Leaf. The upscale models are comparable in price. But you still can’t drive any of them to Portland or Spokane and back on a single charge — which makes overall value for the price an individual decision.