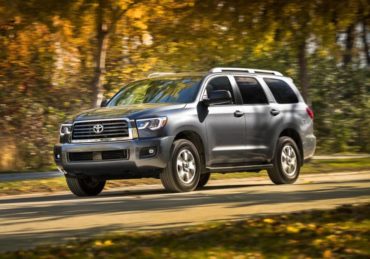 The Toyota Sequoia is a full-size, eight-passenger, truck-based body-on-frame SUV, with three seating rows and a powerful V8. Last redesigned for the 2008 model year, it has since had evolutionary changes. Our test-driver was the Sequoia TRD Sport edition, which debuted in 2018 and focuses on off-road prowess. Rolling on 20-inch black alloy wheels, it features sport-tuned Bilstein shock absorbers and front/rear antisway bars. 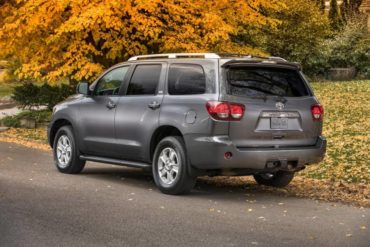 Interior: The Sequoia isn’t as lavishly appointed as its sibling Lexus LX570, featuring hard plastic and matte-metallic plastic trim. The front seats are soft, comfortable and wide. Second-row seats slide for additional legroom, but the standard bench isn’t as comfortable as the optional captain’s chairs. The third row folds, boosting cargo space, yet is problematic for adults. Cupholders and cubbyholes abound, but not every seat has a USB port. Toyota’s Entune infotainment system works well with a smartphone. The navigation interface is more intuitive than most. Cargo capacity is a major plus. Cargo volume is 18.9 cubic feet, expanding to 66.6 with the third row down, and a cavernous 120 with rows two and three folded down.

Under the Hood: The Sequoia is powered by Toyota’s reliable 5.7-liter iForce V8. Rated at 381 horses, it develops 401 pound-feet of torque, driving a reliable six-speed automatic. Rear-wheel drive is standard — all-wheel drive optional.

Behind the Wheel: The Sequoia features a composed ride, with the truck-type suspension absorbing most rough spots. Because of its high center of gravity, expect some body lean when cornering. Most available torque springs to life around 2,200 rpm, delivering impressive performance — 0-60 in under seven seconds. With four-wheel drive, the two-speed transfer case regulates the power split between front and rear wheels. Off-road, the differential can be locked, while Toyota’s electronic traction control system helps limit wheel spin. A properly equipped Sequoia can tow up to 7,400 pounds.

Bottom Line: The Toyota Sequoia may be somewhat long-in-the-tooth, but standard equipment and performance impresses, with roominess and towing capacity key for those who need it.