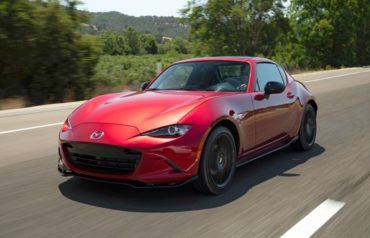 The Mazda MX-5 Miata was completely redesigned and reengineered for model year 2016. This fourth-generation Miata honors the original concept — a two-seat, rear-wheel-drive roadster in the tradition of classic British sports cars. Only this version is smaller, lighter and more efficient than its treasured predecessor. What didn’t change is what’s made the Miata so beloved for the past three decades — its agile and invigorating driving manners. However, new for 2019 are 26 more horses and three more pound-feet of torque.

Walkaround: The more things change, the more they remain the same. While the previous Miata was available with a retractable hardtop, the RF is certainly more stylish, targeting drivers who prefer mostly top-up driving. With the roof in place, the RF is a sleek, secure coupe — and an open-air head-turner with it open. 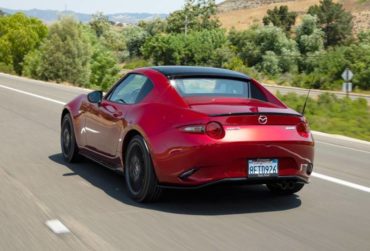 Interior: The interior is classic roadster — spartan and simple — with the steering wheel and pedals situated directly in front of the driver. Large, easy-to-read-at-a-glance analog instrumentation is positioned horizontally, creating the illusion of space. The prominent center console separates driver and passenger, with Mazda’s state-of-the-art infotainment system’s 7-inch touchscreen mounted above the dash. Round air vents and climate controls finish off the classic roadster styling. Blind-spot monitoring, rear cross-traffic and lane-departure warning systems are all standard. Other technology includes hands-free Bluetooth, nine-speaker Bose audio and steering wheel controls, along with the requisite push-button start and power windows, mirrors and remote door locks.

Behind the Wheel: One of the most fun drives we’ve ever had was driving a 2015 Miata on the hilly, winding, two-lane blacktop between Longview, Washington, and Vernonia, Oregon — and back. However, the re-engineered MX-5 is the best-driving Miata ever. The chassis is evenly balanced, making handling very predictable: The car does exactly what you demand and expect. Driving to Portland and back, it handled the freeway well in exceptionally bad weather and was still pure driving fun.

Bottom line: If you’ve ever wanted to own a responsive, two-seat, classic-style roadster that’s thoroughly safe, modern and reliable, the 2019 Mazda MX-5 Miata RF is it. Personally, we’d buy this car in a New York minute — and just may.