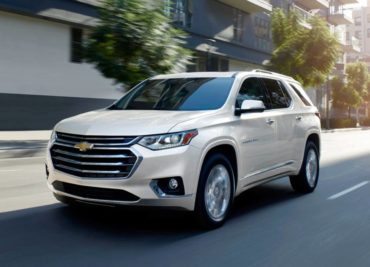 Walkaround: Chevy didn’t want the Traverse looking like a crossover, but a real SUV — and it does — pirating its lines and shape from Chevy’s Tahoe. However, it’s built on the same chassis as the Malibu. It stands tall, boasting a big grille rolling up to the hood, with sweeping LED headlamps. A thick, aggressively forward-angled C-pillar conveys motion, while the straight-wraparound rear-window glass accentuates the roofline. The rear has a rather blank slate look — except for the Chevy bowtie on the liftgate. 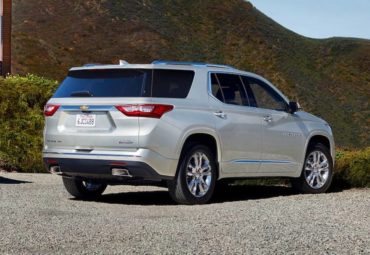 Interior: The cabin appears truck-inspired — with a sort of Tahoe wannabe look. Materials quality depends upon the trim level. Our premier model test driver featured leather trim and other upscale touches like the premium Bose sound system and Apple CarPlay. The front seats are wide, supportive, comfortable and eight-way power adjustable. The second row offers a choice of bench or captain’s chairs. The bench — which splits and folds — features GM’s SmartSlide, while the captain’s chairs flip for easy third-row access. Third-row legroom is best in class, at 33.5 inches. The Traverse boasts 23 cubic feet of cargo space behind the third row, which grows to 58.1 with it folded down and a massive 98.2 with both rows flattened.

Behind the Wheel: The much-improved, 3.6-liter V6 is spirited from a standing start, with an aggressive throttle response, and a deep and resonant sound under hard acceleration. The smooth, 9-speed automatic transmission shifts quickly, consistently and predictably under hard acceleration. Steering, however, is heavy and somewhat numb, offering little feedback. Braking is strong and handling is good thanks to MacPherson struts in front and the rear, five-link independent suspension.

Bottom Line: The Chevy Traverse looks and acts like a smaller version of the body-on-frame Tahoe — but is really a crossover. The V6 and the nine-speed transmission are huge improvements, as is the spacious interior. For folks needing a lot of room, the Traverse is definitely worth checking out.