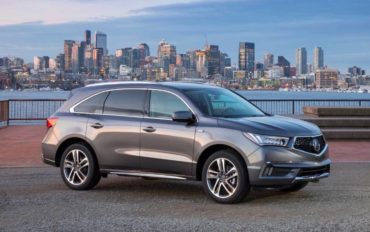 Overview: The Acura MDX is a roomy, nicely equipped, midsize, near-luxury crossover SUV. Not much has changed from 2018 except for four new exterior colors and new interior wood treatment. The big news is 31 additional horses and nearly 37 percent better city fuel economy. 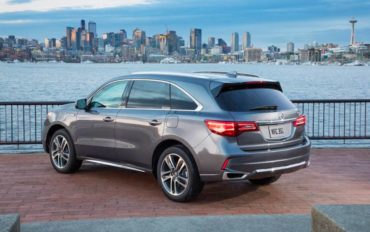 Interior: The MDX is roomy and seats up to seven. It features plush, supportive front seats, with low side bolsters for easy entry and exit. The driver’s seat automatically slides back when the door is opened. The cabin is exceptionally quiet thanks to active noise-cancellation, acoustic glass and lots of insulation. It also features a 7-inch touchscreen with faster response and simpler menus and commands than previously on the dual-screen interface. The 60/40 second row slides for additional legroom and folds almost flat. A small, illuminated button on each side of the row moves the seat to enable reaching the third row. However, the optional captain’s chairs are the best way to get there. The third row folds flat by pulling a lever, with headrests flipping forward. The tiered, sloping dashboard leads into a functional, V-shaped centerstack with a deep bin, cellphone tray, second larger tray with sliding woodgrain top, convenient cupholders and another small bin with a power outlet. With both seats folded, the cargo area features a roomy underfloor storage area.

Under the Hood: Our test-driver — the MDX Sport Hybrid — utilized the 3-liter V6 and seven-speed dual-clutch transmission mated to a three-motor system, with one motor at the transmission and two for the rear wheels. The system was basically borrowed from the Acura NSX supercar and RLX sedan.

Behind the Wheel: The MDX is pleasant to drive, and the SH-AWD system offers four driving modes: comfort, normal, sport and sport-plus. Steering doesn’t offer a lot of feedback, but the MDX feels stable and capable when pushed. Handling is admirable for a vehicle this size, and as close to nimble as an SUV gets.

Bottom Line: The Acura MDX offers great handling, a smooth ride and a terrific powertrain. It isn’t the cheapest SUV — but it does deliver excellent value.