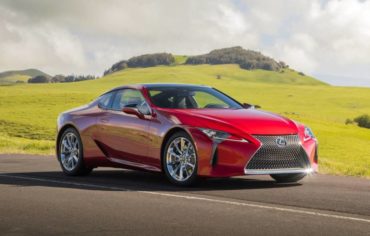 Overview: The Lexus LC 500 originally debuted as a concept car at Detroit’s 2012 North American International Auto Show. While Lexus had no plans to build it, the absolute rave reactions from show-goers changed the automaker’s mind. Like many of them, we think this is the most beautiful Lexus ever built — despite that big grille.

The Lexus LC is an all-new line of rear-wheel-drive luxury vehicles, and the new flagship of Toyota’s luxury brand. It was launched for the 2018 model year in two models — the V8 LC 500 and hybrid gas-electric LC 500h. We’ve driven both. An LC luxury sedan is next to debut.

Walkaround: The LC 500 sports Lexus’ signature grille at the end of a sexy-looking, elongated hood. The roofline reminds us of an F-16 fighter jet canopy, while the rear end features jewel-like LED taillights seemingly speeding through the night. This car looks like it’s doing 100-plus mph sitting still.

Interior: If the LC has one glaring fault, it’s the beautifully crafted, luxurious interior. There’s handsome, stitched leather available in unique colors, and seats that hold you comfortably in place.

However, the horizontal dashboard and center stack/console take up knee room, forming walls isolating the driver and front passenger. Controls are a myriad of toggles, stalks, wheels and a mouse/touchpad for the 10.3-inch split screen that’s overly sensitive and difficult to manage — even at low speeds — mandating reliance on the steering-wheel controls. Quite frankly, it’s the least user-friendly and most distracting system we’ve ever encountered.

Under the Hood: The LC 500 uses the same 5-liter V8 as the RC F and GS F. It delivers 467 horses and 389 pound-feet of torque without turbochargers or a supercharger.

The LC 500h features a 3.5-liter V6 with two electric motors powered by a 44-kw lithium-ion battery. It boasts a combined 354 ponies. One motor powers the car at low speeds through three programmable power levels, while the second adds power at higher speeds.

Both cars are married to a smooth 10-speed automatic with paddle shifters and are capable of speeds in excess of 150 mph.

Behind the Wheel: The LC 500 feels like a large, heavy coupe — with inspired road manners. On a trip to Portland and back, we found the ride spirited and the steering fluid. It feels solid and surefooted, while the throaty growl of the V8 is amplified and piped into the cabin.

The V6/electric LC 500h accelerates almost as fast as the V8, but the hybrid uses an unnatural, synthetic soundtrack to imitate the V8 that doesn’t fool anyone.

There are four drive modes: Eco, Comfort, Sport and Sport Plus. The combination of steel, aluminum and carbon fiber causes the chassis to be very stiff, creating exceptionally composed, precise handling on curvy roads that respond best to a fully engaged driver.

Bottom Line: The gorgeous, powerful Lexus LC is fast, smooth and precise. It’s heavy by sports car standards, restless by luxury car standards but can be as gentle — or aggressive — as you want it to be.