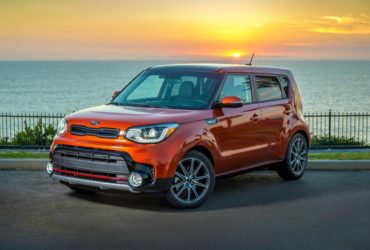 Overview: The Kia Soul! (“Exclaim”) is a purely fun compact hatchback. Last redesigned for 2014, it offers good handling and an efficient cabin. The Soul also got a new turbocharged engine for 2017 — which powered our test driver. There were no significant changes for 2018.

Walkaround: While the Soul’s styling is evolutionary and not particularly fresh, it has outlasted its main market competitors, the Honda Element and the Nissan Cube.

Its sharp angles work well with the roofline, while the windshield pillars lean back just enough to keep its boxy profile from being too boxy.

Interior: The Soul isn’t just a compact hatchback; it’s also a small cargo van featuring 24.2 cubic feet of space behind the rear seats, and 61.3 with them folded flat. You can pack a lot of stuff in there. There’s also 39 inches of rear legroom — more than many midsize crossovers. 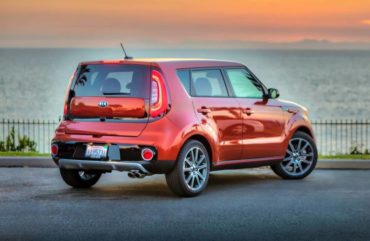 The dash has lots of hard, black plastic countered by chrome trim, with some soft-touch surfaces. The centerstack controls angle toward the driver, with speakers sitting atop vents on the dashboard edges. They can also match the beat of the music — in color.

The seats are firm and supportive but it doesn’t appear Kia paid much attention to sound deadening, as the turbocharged engine’s noise is present at 4,000 rpm.

Under the Hood: There are three engines for three Soul models. Our test driver featured the same 1.6-liter turbocharged four-banger used in the Hyundai Elantra Sport (Hyundai owns 49 percent of Kia). It’s married to a smooth, seven-speed dual-clutch automatic transmission.

Behind the Wheel: The turbo powerplant, built by Hyundai, delivers 201 horses and 195 pound-feet of torque — guaranteeing torque steer when you floor it.

However, the Soul doesn’t drive like a tall box in tight corners — even with its short wheelbase. Twin-path dampers offer confident cornering, isolation from moderate bumps, and strong driver control. Four-wheel disc brakes are standard, with brake assist and hill-start assist. It handles responsively on tight winding roads, featuring spirited accelerating and braking. In sport mode, steering gets tighter for even more fun.

Bottom Line: The turbocharged Soul! lives up to its name, and is just a fun vehicle with loads of utilitarian uses.