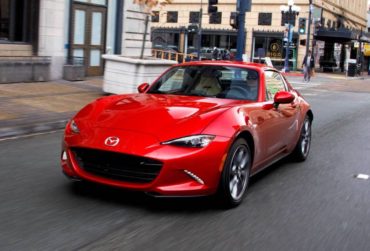 Overview: The Mazda MX-5 Miata was completely redesigned and reengineered for the 2016 model year. This fourth-generation Miata honors the original concept — a two-seat, rear-wheel-drive roadster in the tradition of classic British sports cars. Only this version is smaller, lighter and more efficient than its treasured predecessor. What didn’t change is what’s made the Miata so beloved for the past three decades — its agile and invigorating driving manners. However, new for 2017 is a retracting hardtop roof that hides below the rear decklid and looks something like a Porsche 911 Targa.

Walkaround: The more things change, the more they remain the same. While the previous Miata was available with a retractable hardtop, the new RF is certainly more stylish — targeting drivers who prefer mostly top-up driving. The RF is a sleek, secure coupe with the roof in place, an open-air head-turner with it open. 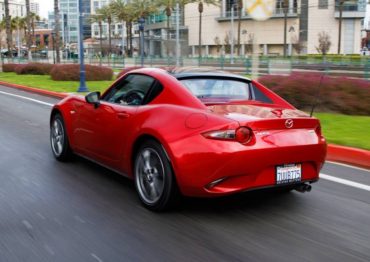 Behind the Wheel: This reengineered MX-5 is the best-driving Miata ever. The chassis is evenly balanced, so handling is very predictable — the car does exactly what you expect. Driving the new MX-5 is perhaps the most pure driving fun we’ve had since driving a 2015 Miata on the hilly, winding, two-lane blacktop between Longview, Washington, and Vernonia, Oregon — and back.

Whines: While not underpowered at 155 horses, more torque would be welcome.

Bottom Line: If you’ve ever wanted to own a responsive two-seat classic-style roadster that’s thoroughly safe, modern and reliable, the 2017 Mazda MX-5 Miata RF is it. Personally, we’d buy this car in a New York minute — and just may.