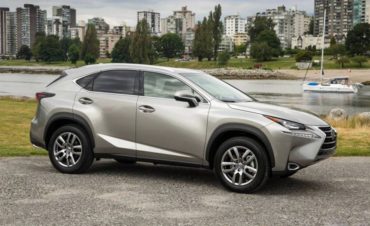 Overview: The 2017 Lexus NX is an unconventional small-luxury-crossover SUV — the first for Lexus — based somewhat upon Toyota’s RAV4 platform. It’s the first with a turbocharged engine, and was the first example of an unconventionally aggressive design (for Toyota/Lexus anyway) that’s showing up elsewhere in Toyota’s product line. Since its introduction in 2015, changes have been mostly evolutionary — which speaks volumes about consumer acceptance of such unconventional design. The NX features brand-specific powertrains that include a turbocharged 16-valve, DOHC 2-liter 4-cylinder in the NX 200t F-Sport (our test vehicle) that puts 235 ponies to the pavement.

Walkaround: Visually, the NX is quite unique, with sharply creased bodylines, high doorsills, an up-sweeping rear end and an oversized version of Lexus’ signature grille. The NX F-Sport takes the whole look-at-me thing way over the top with a black mesh grille, black mirrors and metallic lower-bumper moldings. Add the optional 20-inch wheels, and the F-Sport looks exceptionally recalcitrant. LED-accented door handles add a nice — and practical — touch in the dark. 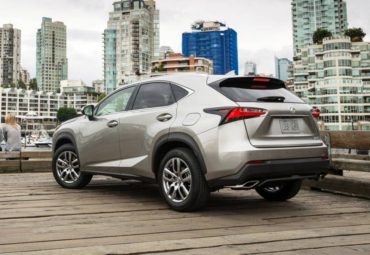 Interior: The small platform hasn’t hampered the roomy, highly refined, tastefully appointed interior one expects from Lexus. There’s power everything and the usual array of advanced technology we all now take for granted. The Z-shaped profile of the center stack and console adds tasteful sportiness — right down to the aluminum pedal covers — without overdoing it. Unlike most crossovers, the seats aren’t elevated, which adds headroom, while seatbacks on the optional power-folding rear seat recline independently. There’s a handy storage compartment under the cargo floor and an array of cubbies and pockets throughout the cabin.

Behind the Wheel: While most Lexus models are comfort-mobiles, the NX F-Sport has an enthusiastic personality. The powerplant is spirited, handling is quick, and switching to sport-driving mode changes the transmission’s shift points for impatient acceleration. The NX F-Sport is just plain fun to drive. It handles curves with enthusiasm and feels quite confident at high speeds.

Bottom Line: The NX F-Sport looks, feels and drives like a different kind a Lexus — because it is. Its bold design, spirited performance and out-of-the-ordinary personality will attract new, younger buyers to the brand. Lexus’ legendary quality, luxury and reliability will guarantee they stay.