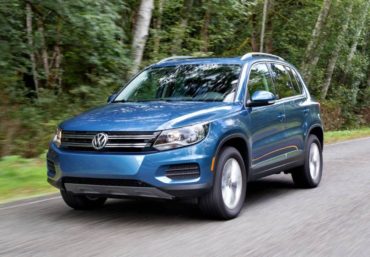 Overview: The Volkswagen Tiguan, which debuted in 2009, delivers a different take on the compact crossover SUV. While the vehicle itself isn’t totally unusual, it’s definitely outside the box, having been designed primarily for European buyers who place a larger emphasis on small dimensions and a sporty ride. While most competitors in this segment are fairly utilitarian in nature, emphasizing their practicality, the Tiguan’s upscale interior and refined driving manners give it a distinctly European flavor that the competition is lacking. The Tiguan is powered by a 2-liter turbo-four that’s the only engine available. It’s married to a six-speed automatic transmission. However, the base front-wheel-drive version comes with either a six-speed manual or a six-speed automatic transmission, but all others are automatic-only. All-wheel drive can be specified on all but the base, manual-equipped Tiguan.

Walkaround: The Volkswagen Tiguan is an attractive four-door, five-passenger compact crossover. It separates itself from the competition thanks to its sleek European design and high-quality interior. In profile, the Tiguan bears a resemblance to the BMW X5. 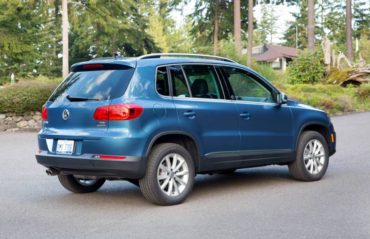 Interior: Five trim levels are available, and all come standard with plenty of features, including eight-way manual front seats, a leather-wrapped steering wheel, a 40/20/40-split-folding and reclining rear seat, Bluetooth phone and audio connectivity and an audio system with an auxiliary audio jack and a CD player. Controls are large and well-placed, Instrumentation is easy and simple to read at a glance. With 23.8 cubic feet in the rear, maximum capacity grows to 56.1 with the second row folded down. That’s well shy of class leaders such as the Honda CR-V and the Toyota RAV4.

Behind the Wheel: The Tiguan delivers solid driving dynamics. The 200-horse turbo-four has plenty of power to move this crossover efficiently. The six-speed automatic is well-behaved and smooth. Unfortunately, the Tiguan falls short in its ride/handling balance because rough roads are felt in the cabin. Even with plenty of grip, the Tiguan can feel top-heavy when cornering.

Bottom Line: The Volkswagen Tiguan is an attractive, solid, comfortable crossover. While it may not be for everyone, it does offer perhaps the best driving dynamics in this crowded class.