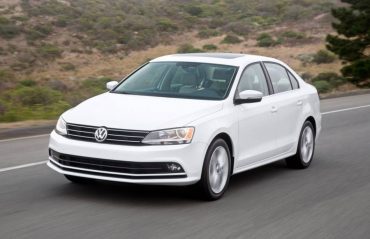 Walkaround: The Jetta is plainer than a Corolla but lacks the visual stylishness of the Cruze, Focus or Elantra. The grille features three horizontal bars. LED running lights are optional, and the small trunk spoiler reminds us of Jetta’s sibling, the Audi 4. LED taillamps are available on the GLI and Hybrid. 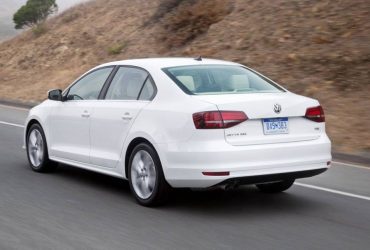 Interior: The cabin is simple, with intuitive controls. There’s no excessive instrumentation — instead, classic round gauges, a start button on the console, a USB port near the bin in front of the shift lever. There are two cupholders and water bottle holders in the doors. A rearview camera is standard on all models but the base Jetta S.

Behind the Wheel: The Jetta Hybrid features the new 1.4T turbo hybrid engine with a high-voltage battery pack. It adds a 20-kilowatt (27 horsepower) electric motor with a clutch on each end, for a total of 170 horses. The electric motor can power the Jetta to 44 mph and becomes the main powerplant in what VW calls “sailing mode,” solely powering the car when it can — like when just cruising.

With four-wheel independent suspension, the Jetta’s handling matches that of the Focus and Mazda 3 — and that’s a compliment. It provides the best combination of ride control and precise feel. Feedback from the electric power steering is better than most. The brakes are strong and confident.

Whines: The brakes feel somewhat dead until the pedal pushes back when it goes from regenerative (battery-charging) to mechanical stopping.

Bottom Line: The Volkswagen Jetta offers a lot of car for the money — midsize interior in a compact car — and the best handling and ride in this segment. Plus, it’s way more fun to drive than a Prius, while delivering an EPA-rated 44 mpg.