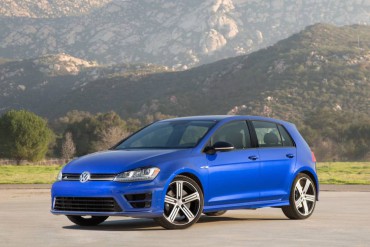 There’s more than one reason the 2015 VW Golf is the North American Car of the Year — not to mention earning a few other honors as well since its debut late in 2014. The seventh generation of the most successful European car of all time was completely redesigned for 2015, and the Volkswagen Golf lineup has become one of the most extensive vehicle families of compact hatchbacks, featuring both three and five-door body styles and multiple powertrain combinations.

I’ve had occasion to drive them all — including the all-electric eGolf, as well as the diesel version — which were showcased at a recent press event. I drove another version in my regular weekly rotation, and yet another as a courtesy loan during a personal business trip to Atlanta.

eup features the gasoline-powered Golf TSI and energetic GTI models, in two, and four-door hatchback configurations. Also available is the four-door, diesel-powered Golf TDI, and the aforementioned all-electric e-Golf. Also, VW just recently debuted the roomy 2015 Golf SportWagen. It seems there’s a Golf for just about every driver’s needs — except the hot rodder. Until now… Enter the high-performance Golf R, which is a rocket, pure and simple.

The only hatchback competition for the 2015 Golf R is its more expensive colleague, the Audi S3. However, look for a new, hotter Ford Focus in the 2016 model year.

Walkaround: The Golf is VW’s first use of its versatile MQB platform in the U.S. The evolutionary styling leaves it easily identifiable as a Golf, in spite of a slightly longer wheelbase, longer hood with short overhangs, a wider track and lower roof than the previous model. The Golf’s familiar shape is crisper yet more rounded, and aggressive looking.

The distinctions between the rest of the Golf lineup and the R are subtle, with the most noticeable being black finish side mirror backs, four tailpipes, and R logos on the front fenders. The most significant change is the front fascia, which features standard Bi-Xenon headlights with U-shaped LEDs flowing into a slimmer grille with larger air intakes. LED running lights are standard, as are 18-inch, R-specific design alloy wheels, with 19-inchers optional. 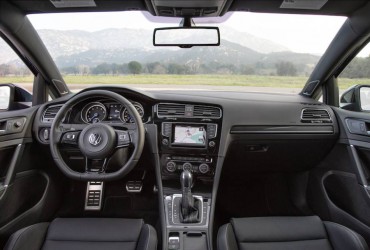 Controls are angled slightly toward the driver, and the instrumentation features classic, easy to read, white-on-black numbering. An information screen sits between the tach and odometer and allows drivers to easily see various functions by toggling a steering wheel-mounted control.

A premium audio system by Fender — of guitar fame — is optional. All 2015 VW Golf models come standard with iPhone connectivity using Apple’s newest Lightning plug. With our iPhone 6 plugged in, we were disappointed the phone’s navigation audio commands didn’t come through the car’s speakers, as they do with Nissan, Hyundai, and most luxury brands. However, the Golf’s built-in navigation works just fine.

There’s ample headroom and adult-sized legroom front and back. Cargo space measures 22.8 cubic feet, and the Golf’s boxier shape allows stuff to be stacked nearly all the way to the roof. 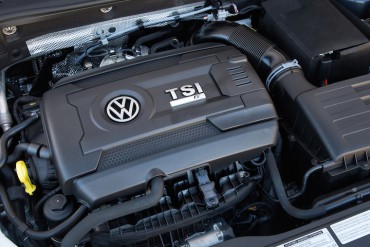 Under The Hood: The Golf R features a 2.0-liter turbocharged, direct injection TSI 4-cylinder powerplant. It boasts variable valve timing with two-stage exhaust valve lift, and delivers 292 horses and 280 lb.-ft. of torque — 36 more horses, and 37 lb.-ft. more torque than the previous R model. It’s EPA rated at 23/30 mpg City/Highway — an improvement of three miles per gallon over the previous-generation Golf R, which originally debuted as a 2012 model.

The engine is married to either a 6-speed manual or VW’s DSG automatic transmission. All Wheel Drive is standard.

Behind The Wheel: Simply put, the Golf R is a blast to drive. VW says it does the 0-60 drill in 4.9 seconds, but it feels faster than that. Our test drive took us from Pacific Beach just north of San Diego, across the hills to Julian and back. The route featured a lot of winding, hilly, 2-lane blacktop, and in the R, it was an E-Ticket ride.

Handling on the Golf R is tight and certain, thanks to all-wheel drive, lightning shifts — up and down — delivered by the DSG paddle shifters, and the DCC option package, which includes a sophisticated adaptive damping system, bigger brakes, 19-inch wheels, more aggressive tires, and navigation. We easily handled corners marked 35 at double that speed. Side bolsters in the comfortable front seats held us firmly in place around those corners while the firmer suspension all but eliminates body roll, inspiring driver confidence. Braking is formidable and we never experienced a hint of fade, no matter how hard or often we hit them.

Volkswagen says the Golf R is the fastest car it’s ever brought to the U.S. After a day behind the wheel of this missile, we don’t doubt it. Top speed is limited to 155 mph, and while hitting three digits a number of times, we didn’t get near that, but felt like we could — and pretty quick.

Whines: For some reason, Volkswagen has declined to put a USB port in the Golf, but the iPhone connection does fit the latest version. If you like your music loud, the optional Fender system delivers, but at low to moderate volumes leaves something to be desired.

Bottom Line: The new 2015 Volkswagen Golf R is sophisticated machinery with European road manners. The fact this car is so much fun to drive — and yet still affordable at just over $39,000 — is perhaps its best quality of all.