We confess a personal bias towards the Kia Sorento, which we acquired driving a 2015 model on a day trip from Phoenix to Sedona and back after the initial intro event in Arizona. We drove it where and how we wanted with no set drive route or schedule, and came away knowing this was a much better vehicle than we originally thought. For 2016, it’s just gotten bigger and better. 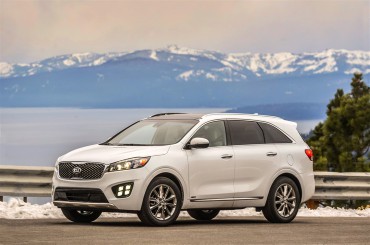 That version of the Sorento, even at the end of its life cycle, ranks third on Kia’s sales chart. The second generation of the original body-on-frame Sorento morphed into a five-to-seven passenger unibody crossover utility vehicle — or CUV. The third-generation, American-made, 2016 Sorento has the Korean automaker reaching out to a much broader audience, with three powertrain options — including a new turbocharged version of its 2.0-liter 4-banger, and increased trim, technology, interior, and other upscale choices, not to mention more head and legroom, than ever before.

According to Kia marketeers, the new Sorento competes with a wide variety of CUVs across two market segments, including the Jeep Cherokee, and the larger Grand Cherokee and Toyota Highlander, as well as a host of somewhat smaller vehicles like the Ford Escape, and Honda CR-V among others. There are five trim levels — L, LX, EX, SX, and SXL, and all are front-wheel drive (FWD) with Kia’s DynaMax all-wheel drive system an option on all.

The essence of the all-new 2016 Sorento is the significantly modified platform it rides on. Torsional rigidity has been increased 14 percent, while 53 percent of the unit-body consists of advanced high-strength steel — a 115 percent increase over the previous Sorento. Industrial strength adhesives combined with dual-seal lip joints and large diameter and laser welding techniques result in the strongest Sorento ever built.

Walkaround: The most immediately no 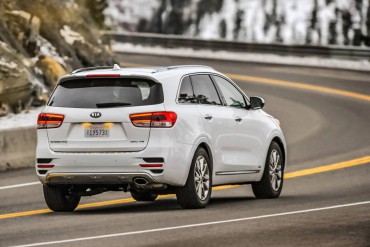 ticeable change is Kia’s new signature grill, which first debuted on the luxurious K900. It seemingly appears to be Jaguar-inspired, with the Kia badge front and center.
The roof slopes gently downward as it flows to the rear from the raked front windshield, ending with a liftgate-mounted rear spoiler. Chrome accents outline the windows on the SX Limited V6, with body-colored door handles

and heated mirrors with turn signal indicators standard across the line. Projector-style headlamps are standard on all, with foglights molded into the front fascia below the grill.

Depending on which model you choose, there are a variety of other exterior options available such as chrome door handles, self-leveling Xenon headlights, roof rails, various other chrome accessories, and a panoramic sunroof.

Interior: The interior is an exceptionally comfortable, harmonious experience, especially on the upscale trim levels. Contrasting colors, such as the black and white Nappa leather in our SXL test vehicle showcase Kia’s new, more premium direction. Regardless of which trim you 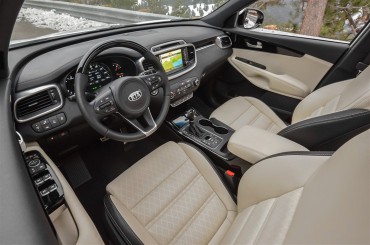 Also available are heated and ventilated front seats, heated rear seats, a 14-way power driver and 8-way power passenger seat — as well as a seat thigh extension for the driver. The various available interior trim levels include a 40/20/40 second row five-passenger seating system as well a 50/50 third-row seven-passenger configuration. Folding the 50/50 split seats is easy — a simple tug on the lever quickly folds them flat, and they’re raised and locked into position just as efficiently. The second row 40/20/40 split means longer objects like skis — or 2x4s — can be hauled while maximizing passenger space. At 74 cubic feet overall, cargo room is abundant. However, with the third row up, it’s reduced to 11 – an increase from the previous 9.1 cu-ft. 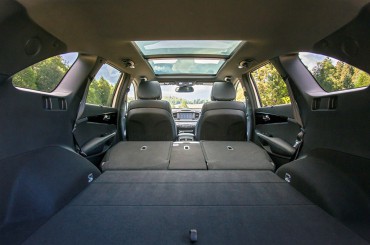 of VW and Jeep. Under the center-positioned large touchscreen, which works the navigation system and Kia’s UVO telematics, are the dual zone climate controls. There’s individual knobs for the driver and passenger, and below are buttons for heated seats (and/or the optional heated and cooled front seats) and the heated steering wheel. Below that is a handy storage cubby with USB and power ports.

Near the shifter and the chrome-ringed cupholders are three selectable drive modes buttons — Normal, Sport, and Eco — which adjust the steering and shift points.

Under The Hood: There are three engine choices, – a 185-horse, 2.0-liter 4-banger, and a turbocharged version of that powerplant, putting out 240 horses, plus Kia’s workhorse 3.3-liter V6, which puts 290 ponies to the pavement. All powertrains are married to a smooth, 6-speed, electronically controlled automatic with Kia’s Sportmatic manual shift option. All Sorentos are 50-state certified as ULEV-Level II, Ultra-Low Emission Vehicles.

Behind The Wheel: As we were leaving the Ritz Carlton in Lake Tahoe, I was our navigator for the first leg of our day-long test drive that would take us over a wide variety of terrain in eastern California and western Nevada, including rolling hills, mountain foothills, plains, and freeways, with lunch in downtown Reno. From there, it was more of the same, including a good bit of hilly, winding two-lane trekking around the lake itself, and back up the mountain to our hotel. 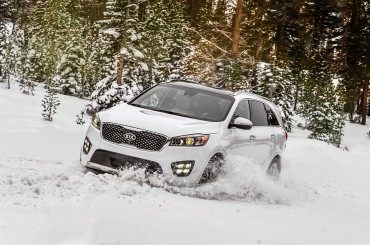 nch. Driving the second and after lunch legs of the journey — about 100 miles of back-to-back seat time, we can’t say that we really felt any significant difference in the two powerplants. Both delivered satisfactory acceleration, with plenty of torque.

The reinforced chassis is well damped, resulting in a ride that’s comfortable and quiet, with good handling and strong braking even on dubious surfaces. Overall, the Sorento is predictable and fundamentally competent.

Whines: Like most CUVs, the third row is strictly a kid zone.

Bottom Line: The 2016 Kia Sorento is much-improved — and the previous version was pretty good to begin with. It offers true value for the price, and you’ll be hard-pressed to do better in terms of cost, style, quality, and capability.