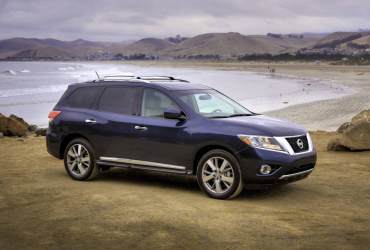 The term “Crossover SUV” has become standard nomenclature throughout the automotive industry, without a clear definition of what, exactly, makes up such a vehicle. The line between crossovers and “real” SUVs has become so blurred it’s hard for the average consumer to know which is which. The only certainty is that crossovers have become a blend of minivans, family sedans and traditional Sport Utility Vehicles (SUV).

Truck-based, body-on-frame vehicles like Nissan’s own XTerra, have always defined “real” SUVs. However, by that definition, is the unibody Jeep Grand Cherokee, which arguably offers as much off-road capability, a crossover or a “real” SUV? Most would agree it’s “real.” The 2014 Pathfinder, which is available in both Front-Wheel and All-Wheel Drive (AWD) unibody configurations — defines the current crossover state-of-the art. It’s loaded with creature comforts and features never before found in the rugged, body-on-frame Pathfinder of days past.

Walkaround: I have to admit, when I saw the first media photos of the designed Pathfinder, I was less than impressed. However, photography doesn’t quite do the Pathfinder justice. For starters, it doesn’t have the same boxy styling, or truck grille, which linked the previous Pathfinder to the Frontier and Titan pickups as well as the larger Armada SUV. Like most newer, car-based crossovers, the styling is softer and more rounded, with a strong character line running the length of the body, flowing from the headlights down the hood, underneath the beltline and into the LED tail lights.

The front fascia stylizes the previous truck look so expect to see the Frontier and Titan sport similar changes in the future.

The 2014 Pathfinder rides on the same platform as the Infiniti QX60, and is slightly larger in all dimensions than the previous version. Its 114.2-inch wheelbase is two inches longer than before with the body itself almost five total inches longer, and 4.4 inches wider.

The height is a full three inches lower, two of which were gained by reducing ground clearance to 6.5-inches for better ingress and egress.

The new Pathfinder has also shed as much as 500 pounds from the vehicle’s overall mass.

The seats are comfortable, with wide bolsters and a well-cushioned bottom, with leather standard with the SL and Platinum trims. The old dashboard’s sharp edges are history, with soft-touch materials on nearly every surface. Thoughtful touches like padded leather on the doors make this Pathfinder seem more like a refined luxury sedan than a rugged off-roader.

The family-friendly second row allows you to slide the outboard passenger seat forward without needing to remove a child seat. It also offers enough leg and headroom for most adults, along with conveniences like cupholders in the door armrests and the ability to slide and recline. All seats behind the first row fold flat, revealing 79.8 cubic feet of cargo space. There’s 16 cubic feet with all seats in position, compared to 79.2 and 16.5 cubic feet in the previous Pathfinder.

In terms of technology, the 2014 Pathfinder abounds in it, starting with Nissan’s Around View Monitor technology, which was perfected by Nissan’s luxury brand, Infiniti. It displays views of every angle on all sides of the vehicle — excellent when parking or maneuvering in tight spaces.

Other amenities include a full navigation/infotainment system, kickass Bose premium audio (available on SL and Platinum trims only), a tri-zone DVD entertainment system, along with a host of alphanumeric safety systems and Nissan’s new Easy-Fill tire inflation system that honks the horn when tires are inflated to their optimum specification.

The old Pathfinder’s conventional, five-speed automatic has been replaced with Nissan’s revamped, and much improved Xtronic Continuously Variable Transmission (CVT). The new CVT is actually a surprisingly good match for the engine — and much better than the previous version.

Nissan used the same basic formula that improved fuel economy on the 2013 Altima sedan, with the CVT shouldering much of the burden. The V6 has been pretty much left alone, while the transmission’s 40-percent reduction in internal friction and use of a drive chain specifically designed for the Pathfinder, improves overall performance. Nissan’s All-Mode 4×4-i system allows drivers to switch between front — and all-wheel drive on the fly, as well as featuring a fully automatic mode, and is available on all models.

Fuel economy for the front-wheel-drive version is 26/highway and 20/city. AWD numbers are 25 and 19. Despite criticism over using a CVT on an SUV, there’s much to say for a tranny only revving the engine to 1,800 rpm’s while driving 70 miles per hour.

Behind The Wheel: We’ve test-driven the 2014 Pathfinder both in front — and all-wheel-drive versions — a couple of different times now on all kinds of roads. Both deliver a solid, smooth, comfortable and stable ride, that’s relatively quiet. And even with the CVT, it didn’t disappoint on some of the more engaging terrain, although in all fairness, while as adequate as any crossover, it’s not the go-anywhere off-road enthusiast’s machine the previous version was. But it isn’t meant to be either.

The car-based platform leaves that traditional truck feeling and ride behind, instead, delivering a refined, dialed-in driving experience. The steering is a bit light for my personal taste, but brakes, acceleration, and handling are all good, and the Pathfinder just feels more nimble than its competitors.

Whines: Visibility is good, although the wide A-pillars make vision around some corners slightly problematic. However, some competitors have larger blind spots.

Bottom Line: Regardless of how you define a crossover SUV, The 2014 Nissan Pathfinder is a winner in the three-row, family-friendly segment. It offers a well-appointed cabin, lots of functionality and decent driving dynamics packaged in a sleek new wrapper, We don’t see how this new Pathfinder could be anything less than successful.