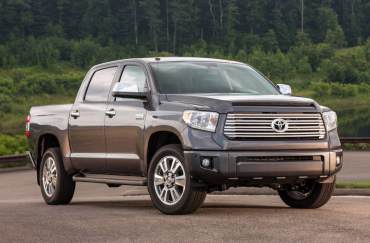 The 2014 Toyota Tundra CrewMax pickup is big — American big. I grew up with the concept that Japanese pickups were small, Spartan, mini-trucks that were best for commuting and occasional light-duty hauling. That’s no longer the case as both Toyota and Nissan are strongly entrenched in the full-size American style pickup market.

You could say that the new Tundra is Texas big as it’s built in San Antonio, Texas, USA. Texas is truck territory and except for its corporate headquarters the Tundra is as Texan as any rig that’s ever run over an Armadillo.

Walkaround: The 2014 Toyota Tundra CrewMax takes up a lot of driveway real estate. It’s every bit as imposing as any Ford, Dodge, or GM pickup. From its massive grille to the huge 20-inch chrome wheels to the limo-size rear doors to the high step-in height it is one big truck.

The fit and finish of all body panels is excellent. The doors shut solidly. The construction quality is comparable to a luxury sedan. That’s a world apart from the tinny mini-trucks that were imported in the early seventies.

Interior: The interior of the top-of-the-line Tundra 1794 Edition is a highlight of an already impressive truck. Spacious and luxurious are two words that come to mind. The 1794 Edition (named for the year the former JLC cattle ranch was established where the trucks are now built) is sumptuous in an expensive den/library/office sort of way.

The rich saddle tan perforated leather and suede seats with white stitching would fit in any upscale home. The power lumbar seats are heated and ventilated. The contoured wood, leather, and aluminum (power tilt and telescopic functions) would also be at home in any executive suite. Handsome wood trim accentuates the leather.

Storage compartments and bins are huge, like the rest of the truck. The console bin could hold a small child if it were equipped with seat belts. Ample storage is great for anyone who uses his or her truck as a mobile office.

The back seat has limo-like legroom. The seats slide and recline for adjustability. There are substantial grab bars and running boards to assist rear seat ingress/egress. The lower seat cushions fold up from the flat floor leaving lots of interior cargo capacity. The huge rear window is power operated for fresh air or access to any livestock you might be hauling.

All the interior room comes at a slight compromise to the pickup bed. The full-width bed is only 5 _-feet long, but that’s still ample given the passenger bias of the Tundra CrewMax. There are sliding cargo cleats and cargo loops for securing loads.

A power moonroof and an excellent JBL stereo and navigation system were other interior highlights. The interior was well-insulated and car-like quiet on the road.

Under The Hood: The largest available Tundra engine — a 5.7-liter V-8 that’s rated at 381 horsepower and 401 lb-ft of torque, powered our test truck. The transmission was a smooth 6-speed automatic with a dial for choosing between two-wheel drive and four-wheel drive. The rear gear ratio is 4.30:1. The transmission has a tow/haul mode. There are engine and transmission oil coolers.

There is a factory installed tow/hitch receiver with 7-pin trailer wiring harness. Four-wheel disc brakes help stop heavy loads. The Tundra can be equipped to tow up to 10,400 pounds.

The EPA rates the 5.7-liter V-8 Tundra at 13-mpg city and 17-mpg highway. We averaged 13.9-mpg in mixed driving conditions with an empty bed. The Tundra is not for buyers who dislike gas stations.

Behind The Wheel: Once you adjust to the sizeable width and length of the Tundra the driving experience is very good. Controls and gauges are well placed and the cabin comfort is first class. Our tester had the optional Blind Spot Monitor with Rear Cross Traffic Alert, which should be considered mandatory.

The driving position is elevated, which is nice in traffic. That doesn’t make traffic less congested, but at least you can see what the holdup is. Parking can be a challenge in malls full of “compact” spaces, but that problem isn’t limited to just pickup trucks.

The Toyota Tundra excels on the open road filled with passengers and/or cargo, but city driving is fine as long as you allow extra time for finding a suitable parking spot.

Whines: I can’t get behind the 1794 moniker. When it takes more than one sentence to explain a name and then it still elicits blank stares it’s not a great name. Maybe it means something at the Tundra assembly plant in Texas, but it’s just four random numbers elsewhere.

I think the frontend styling is overly blunt, but it apparently works for Ford, so other truck builders have followed suit. The Toyota Land Cruiser and Sequoia have much more agreeable noses without looking wimpy.

Bottom Line: The 2014 Toyota Tundra CrewMax 1794 Edition is one impressive truck. It combines all the power and strength of a full-size 4×4 pickup with the creature comforts of a luxury sedan. The Tundra is high style/high function dual-purpose transportation at its best.