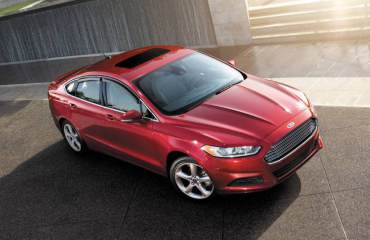 Just as the jelly-bean shaped Ford Taurus redefined basic sedan design upon its debut in 1985, the Ford Fusion has redefined the midsize family sedan.

The Fusion comes with three basic powerplant configurations — the standard gas engine, a Gas/Electric Hybrid, and a plug-in Gas/Electric Hybrid called the Fusion Energi. Unlike the standard hybrid version, the Energi can go up to 22 miles at high speeds exclusively on electric power. After that, the gasoline engine takes over until it’s been recharged.

Debuting in 2005 as a 2006 model, the Fusion was restyled for the 2010 model year and again for 2013. Except for the inevitable evolutionary upgrades, the 2014 Fusion is relatively unchanged, while offering attractive styling, a variety of sophisticated electronic audio and communication choices, and a sporty character more often associated with some German sport sedans than Detroit iron.

Model Lineup: The 2014 Fusion is offered in eight trim levels: The gasoline and hybrid models are S, SE and Titanium, while the Energi is limited to SE and Titanium. All models are front-wheel drive except for the Titanium, which offers all-wheel drive as an option. Our test vehicle was the Titanium version of Gas/Electric Hybrid, and this review will focus primarily on that vehicle.

Notable options abound on the Fusion. In addition to more powerful turbocharged engines, technological features make the car safer and more comfortable. Those include a reverse-sensing system, Active Park Assist to help with parallel parking, adaptive cruise control, Navigation, and blind-spot monitoring. Also offered is the Lane Keeping System, which utilizes a windshield-mounted camera that digitally monitors road markings to detect if the car drifts into another lane. If so, the system sounds a warning, vibrates the steering wheel and ultimately applies steering torque to move the car back into the lane.

Walkaround: The exterior of the 2014 Ford Fusion is basically unchanged, but is very striking, combining German-type luxury styling with aggressive front end design cues obviously influenced by Aston Martin — which was once part of Ford. While the Fusion is classified as midsize, it looks and feels larger, although the overall measurements very closely match those of the Honda Accord and Nissan Altima.

There are some subtle styling changes for 2014 – new original wheel designs, two new exterior colors — Dark Side and Sunset — and restyled headlights. Ford’s ingenious EasyFuel capless gas filler system eliminates wrestling with a gas cap to open it, or waiting for it to “click” back into place.

Interior: The Fusion’s interior is roomy, with attractive interior materials along with excellent fit and finish. There’s plenty of front legroom, with ample shoulder and headroom, accentuated by concave door trim.

Rear seats are comfortable, with adequate leg, knee, and headroom for passengers up to about six feet tall. The inflatable rear seat belts that Ford debuted on the 2011 Ford Explorer are available on the 2014 Fusion. In the event of a collision the belts inflate, distributing the load over a larger area and reducing the risk of abdominal, chest and shoulder injuries for rear passengers.

The standard cloth seats in the Fusion Hybrid and Energi, and optional on the SE, are made from 100 percent recyclable materials.

Technology includes the latest version of Microsoft Sync and MyFordTouch. The Fusion also offers active park assist, a feature normally found on high-end luxury cars, which scans parallel parking spaces and automatically maneuvers the car in on its own.

On models equipped with the MyFordTouch interface, climate and all other functions are adjusted via the 8-inch touchscreen display. Instrumentation includes an optional dual LCD display that allows drivers to toggle through a variety of functions. One cool feature is the overhead interior lighting, which can be turned on and off with a finger swipe.

The touchscreen interface is supposedly improved, but my personal experience found it still quirky at best. A call to the technical assistance line upon encountering a Navigation system issue was an exercise in total futility. Reaching someone after 13 minutes and 47 seconds of being told how important my call was, the tech on the other end couldn’t seem to grasp a simple question that should have had a simple answer. What’s particularly disheartening is that the MyFordTouch interface is perhaps the simplest, and most intuitive and user-friendly of just about any vehicle today — but like many Microsoft products, it doesn’t always work, and/or work exactly as advertised.

The steering wheel is a command center in itself, featuring numerous buttons for vehicle information and settings, audio volume and adjustments, cruise control, handsfree phone operation and voice activation.

The Fusion offers 16 cubic feet of trunk space — slightly more than the competing Camry, Altima, and Accord, but less than the Hyundai Sonata. The battery pack in the Fusion Hybrid reduces that to 12 cubic feet, and creates a high shelf in the back half of the cargo area, but the rear seats do fold for added cargo room.

Under The Hood: All of the gasoline powerplants in the 2014 Fusion are 4-cylinder engines, and all but in the base model are 2.0 liters or less. That made us dubious, but our skepticism proved unwarranted. The Gas/Electric Hybrid combines a 2.0-liter inline-4 with an AC synchronous motor. The combination delivers 188 total horses and 129 lb-ft of torque for the gasoline engine only. The impressive part is the EPA city/highway fuel economy ratings – 47/47 mpg.

Behind The Wheel: Our test drive period included a trip to Portland for the Northwest Automotive Press Association’s annual Drive Revolution event. We drove a wide variety of Electric Vehicles, Gas/Electric and plug-in hybrids back-to-back, providing an opportunity for head-to-head comparisons to the Fusion. Also on the agenda was a Toyota off-road event the next day, which included navigating some winding, two-lane mountainous terrain to reach. The 188-horse 4-banger won’t win any drag races, but held its own both on I-5 and the mountainous stretch. The Fusion’s excellent suspension delivers comfort, with solid, small-car handling in a big package, for an overall athletic driving experience.

Whines: Will Microsoft ever get MyFordTouch right?

Bottom Line: In a segment cluttered with choices, the 2014 Ford Fusion is a competitive family sedan that makes a bold fashion statement. Our well-equipped Titanium stickered at $37,905 — a pretty good value.