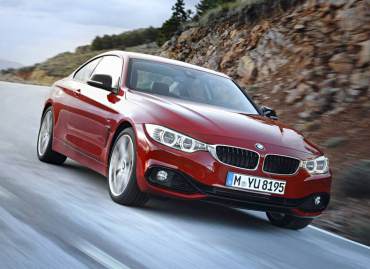 Without going into detail, I’ll openly confess to not being a big BMW fan after being treated very shabbily by BMW Northwest when my wife’s 5-Series needed repairs. Because of that, I rarely write about BMW’s because I’m not always as objective I should be. That said, it’s seemingly a new day at BMW, as they retire the compact sports coupe from the 3-Series lineup, spinning it off as the 4-Series — an all-new, two door, 4-seater, with a lower, wider stance, ample power, and an abundance of the over-engineered technology BMW is known for.

Model Lineup: The 4-Series comes in two configurations — the 428i (our test vehicle, to which this review will be confined) and the more powerful 435i. Both are available with either rear-wheel drive or all-wheel drive, and a choice of a 6-speed manual or 8-speed automatic transmission.

The styling is clearly recognizable as a BMW, and to us at least, appears simply evolutionary, with nothing really new to offer. While not identical, the front fascia closely resembles the latest 3-Series, with BMW’s signature twin kidney grille slightly lower and wider. The double-bezel headlamp housings flow from the grille, wrapping around into the front fender.

The side view is lower and sleeker, with a sharply sloping roofline. Short front overhangs compliment a distinctive body crease running from behind the front wheel, through the door handle, and over the rear wheel. Side windows are a shorter, sharper version of BMW’s signature curve, known as the Hofmeister kink.

In the rear, the back window is short, with taillights slightly flattened versions of those on the 3-Series, and double exhaust tips on the left side.

Interior: The interior design of the 4-Series is more driver-focused than the 3-Series. The center stack has a slight left cant, with a high, tapered dividing line just right of the gearshift, cocooning the driver. Just below the center stack is an odd, lift-out storage tray hiding two standard-sized cupholders.

On top of the center stack is the iDrive screen, which comes standard on all models. It’s large and easy to read, but without navigation, it’s pretty useless for anything except for getting annoyed trying to tune the radio — which is a challenge in itself. The spendy Technology package adds a whole suite of features, including navigation with real-time traffic, and BMW Connected, an app that allows users to sync their smartphones with their cars to use Facebook, Twitter, Yelp, a vehicle finder, and more.

Under The Hood: The 2014 BMW 4 Series coupe features the same engines as the 3 Series and comes in two variations.

The 428i uses the turbocharged 2.0-liter inline-4 that delivers 241 horses and 258 pound-feet of torque — slightly more than the 3-Series. Transmission choices on both are a 6-speed manual or an 8-speed automatic; all-wheel-drive 428i xDrive models come with the automatic only. Not only is BMW’s 8-speed automatic more efficient; it’s also quicker.

Behind The Wheel: The 2014 BMW 4 Series coupe is fun to drive in almost any situation. There are four modes — Comfort, Sport, Sport plus, and Eco Pro. Each adjusts throttle response, steering and handling for distinctly different rides.

With the lowest center of gravity of all BMW models, body roll is non-existent. Handling and braking are simply excellent, with a good balance of ride quality and response, although road and tire noise are evident at all speeds. The electric steering is light at low speeds, with more feedback at higher speeds.

We found the power of the 428i great for everyday driving. It has plenty of pep, climbs hilly terrain at freeway speeds, and we found keeping it under 80 on the freeway to be a challenge.

Whines: BMW technology is way over-engineered, non-intuitive, and not at all user-friendly.

Bottom Line: The all-new 2014 BMW 4 Series is a great sports coupe offering a terrific driving experience. But in my view, at $47,125 as tested — without amenities standard in many lower priced cars — overpriced.