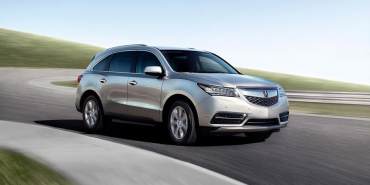 The Acura MDX has always been a stylish, practical, luxurious crossover SUV. The 2015 MDX is no exception, and remains relatively unchanged from the 2014 model, which offered a total redesign of the previous version. For the uninitiated, the Acura MDX is a midsize, three-row, seven-seat luxury crossover SUV that’s only offered in one well-appointed trim level with add-on packages geared for personalization.

The list of standard amenities on the MDX is impressive, and includes high-end items that usually cost extra for on competing models — things like LED headlights, heated leather seats and a multi-angle rearview camera — for example.

The MDX’s three-row luxury crossover competitors include the BMW X5, Infiniti QX60, Volvo XC90 (which will debut a total redesign for 2015), Audi Q7, Lincoln MKT, and Buick Enclave among others. While that list is impressive, in our view, the MDX delivers the most engaging driving experience. The notably spendier X5 is the only one delivering better performance.

Walkaround: As stated, the Acura MDX was completely redesigned for the 2014 model year. The front overhang has been shortened less than an inch, but somehow, Acura’s massive V-shaped signature chrome front fascia looks friendlier, but still aggressive. The way the nose slopes down between the grille from each side to the bumper gives definition to the bumper as well.

The openings under the grille are smartly positioned, and the five-blub each LED headlamps — which Acura calls “Jewel Eyes,” feature a slick design. Although not exactly daylight-bright as Acura suggests, they extend the beam by 75 feet and safety a lot farther.

The side view doesn’t reveal any fancy styling, and except for the small spoiler on the roof, the rear looks like most other SUVs — replete with the requisite LED taillight array.

Interior: The MDX’s interior with its thick, stitched leather-wrapped steering wheel and easy-to-read instrumentation is definitely driver-focused. Fit and finish are excellent, material quality is high, with soft, premium Milano leather standard for the first two rows, along with satin and simulated wood-grain trim accents in the cabin.

The front seats are comfortable and roomy. However, for a vehicle that handles as well as this one, more bolstering would be welcome.

With the center stack anchored by two display screens — one for navigation and the other controlling a myriad of functions including audio, phone, climate and more — the overall layout is clean and simple. More than 40 buttons and knobs have been reduced to nine, saving significant space, now utilized for storage forward of the shift lever.

The navigation system is simple and fairly intuitive. Destinations can be looked up via the seven-inch touchscreen interface mounted directly below the eight-inch navigation screen, or supposedly by using the enhanced voice recognition system. While the navigation screen graphics are easily readable, neither screen offers the crisp, quality graphics typically found in this class.

Instrumentation is well laid out, with the display screen shaded and easy to read in sunlight. The gauges feature LED backlighting, while LED lamps with programmable brightness are used on the center console and front foot wells.

Center console storage space has more than doubled due to repositioning the HVAC system. Big SUVs and pickups have center consoles like this, but not many luxury crossovers.

The second row seats fold down with a touch of one button — located in three places — so third row access couldn’t be easier. With both rows folded flat, cargo space is 90.0 cubic feet. With both rows up, it’s 15.8 cubic feet — equal to a good-sized sedan trunk.

The cabin is exceptionally quiet thanks to more foam in the roof pillars, acoustic glass, new insulating materials under and behind the second and third rows, and a new seal at the rear door sills.

Under The Hood: The 2015 Acura MDX is powered by a 3.5-liter V6 that delivers 290 horses and 267 pound-feet of torque. A six-speed automatic transmission and front-wheel drive are standard, with all-wheel drive optional.

Behind The Wheel: The 2015 Acura MDX is an extremely enjoyable luxury crossover to drive. It’s quiet, and rides a little more firmly than some of its competitors — which isn’t necessarily a bad thing. The V6 powerplant is strong, with an evil-sounding snarl when you stick your foot in it deep enough to approach redline. A six-speed automatic seems a little dated for a sporting luxury crossover, but the transmission is smooth and downshifts quickly whether you’re using the paddle shifters or the gas pedal.

Handling is secure, with a sporty feel that’s often missing from vehicles this size. The AWD system provides extra athleticism as well as traction. Compared to the previous version (2007-2012), this MDX delivers quicker acceleration, better fuel economy, nimbler handling, shorter stopping distances, and improved ride — as well as tighter dimensions outside with more room and comfort inside.

Whines: The A-pillar obstructs forward and downward visibility. The electronics are a major hassle. Some of the more basic functions — like turning on the seat heaters or increasing fan speed — annoyingly require multiple touchscreen button pushes. Tuning the radio — and just finding the presets via the touchscreen — is another disappointment. Like most other vehicles, voice commands fail. The Acura lady inside the box seemingly doesn’t understand English.

Bottom Line: Loaded with features and a pleasure to drive, the 2015 Acura MDX is a good choice for buyers seeking a three-row crossover offering both luxury and value. It’s improved over the previous version in every way — powertrain, acceleration, fuel economy, roominess, comfort, nimbler handling, shorter stopping distances, and smoother ride.