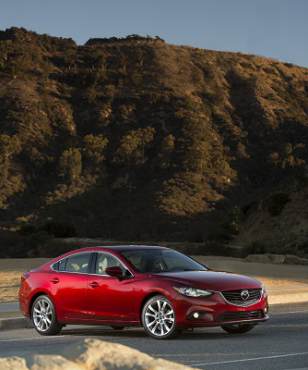 With a retooled powertrain, more standard features, and a striking new design, the 2014 Mazda6 is a worthy alternative to the plethora of boring, look alike, family sedans. Everything from bold exterior lines inspired by Mazda’s Shinari concept car, to the powertrain, to the manufacturing process, are all-new.

The front-wheel drive Mazda6 utilizes Mazda’s Skyactive technology — a collection of technologies and weight reduction strategies that debuted on the CX-5 crossover. The old V6 is history, replaced with a new 2.5-liter inline-4 providing 184 horses and 185 pound-feet of torque. A new injection system and race-inspired exhaust manifold reduce emissions while delivering more power and torque than the previous powerplant. Additional changes include fully electric steering and a retooled suspension, resulting in a better ride, better handling and more braking stability.

Model Lineup: The 2014 Mazda 6 comes in three trims levels: Sport, Touring and Grand Touring. All come with the same 2.5-liter engine; all but Sport come standard with a 6-speed automatic.

Walkaround: With many styling cues derived directly from the radical-looking Shinari concept car unveiled several years ago, the good-looking Mazda6 conveys a more dynamic, athletic, look. The result is a midsize sedan that differentiates itself from the crowd, with striking good looks that aren’t overdone like those of some competitors. 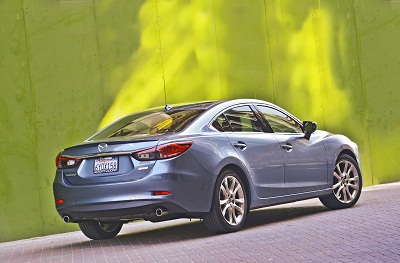 The front end features a curving, trapezoidal grille with stretched horizontal lines. From the side, the prominent nose looks almost shark-like. The athletic look carries forward with wraparound headlamps, and LED foglamps with flared, geometric housings.

The Shinari influence is seen in the deep flowing creases over the front fender that slide into the front doors. The shortened rear deck curves outward, while wraparound taillamps mimic the horizontal shapes up front. Sporty-looking twin exhaust pipes reside beneath the lower plastic bumper, and an integrated lip spoiler is added on the Grand Touring version. Chrome is used subtly, highlighting without overwhelming.

Interior: While the cockpit is driver-centric, finish materials are a somewhat puzzling assortment. There’s good-quality, soft-touch dash and instrument panel trim, but plastic around the doors — including the window switches — have that 80’s-era GM mix-n-match parts-bin look. Still, fit and finish are good. 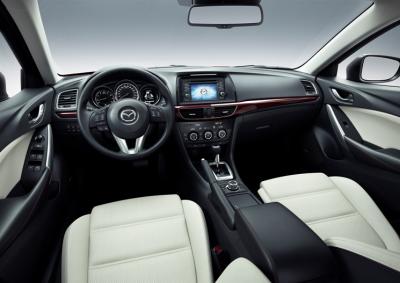 The center stack is clean, with easily identifiable buttons and knobs within easy reach of the driver, although many of the same functions are duplicated on the smaller steering wheel.

Visibility is good all around, with adequate head and legroom. The rear seats can accommodate six-foot passengers without any knee cramping or head bumping.

At 14.8 cubic feet, trunk space is slightly less than some competitors in its class, but the long, deep layout accommodates plenty of luggage. 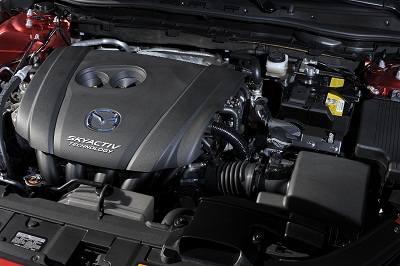 Under The Hood: The Mazda6 features the aforementioned 184-horse, 2.5-liter, inline 4-banger. While the standard gearbox on the base model is a 6-speed manual, it now comes standard with a hill-hold feature. However, an all-new automatic transmission is standard on the Touring and Grand Touring models. It’s a hybrid of the traditional torque converter, kicking in at speeds under 5 mph, giving that familiar automatic transmission creep, and a dual-clutch operating at higher speeds, for quick, almost seamless shifts.

EPA estimates are 25/37 City/Highway for the manual and 26/38 with the automatic.

Behind The Wheel: Thanks to MacPherson struts in front and a multi-link setup in the rear, the Mazda6 delivers a ride that’s sporty, firm and compliant, with minimal body roll around sharp curves.

The all-electric power steering is a vast improvement, and is surprisingly responsive, keeping the driver connected to the road without that overly heavy feeling. 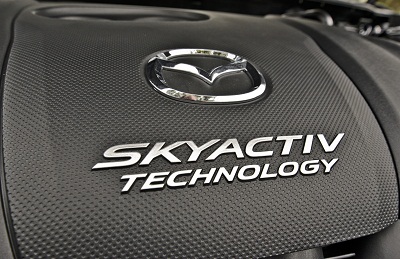 As with all smaller displacement engines, the lack of power is obvious in demanding situations, such as climbing steep hills. But on a couple of runs to the Olympic Peninsula and back, the inline-4 handled passing situations and moderate grades with surprising power and agility. Put the pedal to the metal and you’ll get where you want to go just fine.

Whines: Although the screen is clear and easy to read, we found some navigation functions — such as setting, changing or canceling a destination — non-intuitive, and somewhat annoying.