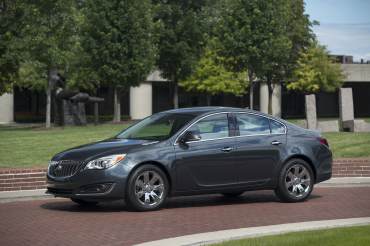 In China, owning a Buick is a status symbol akin to owning a Mercedes, BMW, Infiniti, Audi, etc., in the U.S. I’ve actually never quite understood why. However, driving the 2014 Buick Regal reconfirmed what I already knew after driving the entire Buick lineup more than once over the past couple of years — they’re much better cars now, than at any other time in my life.

With Buick’s product renaissance, unless you’re baby boomer, it’s hard to remember how bad they once were. Choosing a 1973, boat tail back Riviera as a reward to myself for achieving a major milestone in my young life to be my first brand new car, I still vividly remember the grinder marks that were painted over at the factory, and having to actually threaten the factory rep with bodily harm to get them fixed. And who can forget the parts bin Buicks of the 1980s, which were difficult to tell from Oldsmobiles and Chevys, except for the tri-shield badging and signature faux exhaust ports on the sides? Yes, Buick has come a long way, and the 2014 Regal is a measurement of just how far.

Walkaround: While we were impressed with the Regal when it originally debuted in 2010, Buick has significantly refreshed the car for 2014. While Buick’s trademark waterfall grille remains basically unchanged although slightly stylized, the exterior styling has evolved, with a lower, wider appearance that conveys a more aggressive, upscale and contemporary look. New wing-like headlamps are available in two versions — halogen projector beams and xenon high-intensity discharge (HID), with available LED daytime running lamps.

The Enclave-inspired LED wing-shape taillights showcase a chrome strip running nearly the width of the car, sliding right into the lightly smoked glass. Those lights themselves are wider than on the previous version, with an element integrated into the trunk lid.

Interior: The Regal’s cabin is as plush and functional as anything in its class. Material quality on the dash is soft plastics on the upper dash, trimmed in what appears to be stitched leather to match the seats. The lower dash and trim around the center stack is harder plastic that blends in nicely. The leather on the seats is soft and smooth, although the hides used for the steering wheel don’t seem to be quite as soft.

The big news is that the cabin has been redesigned and reorganized. Gone is the previous mass of buttons on the center stack. It’s been replaced with a much cleaner, more attractive design centered around an eight-inch touchscreen housing Buick’s next generation IntelliLink system with a few redundant buttons positioned below. Below that is a clean, logical set of controls for the dual-zone climate system and the heated seats. Instrumentation includes a 4.2-inch display that shows everything from trip, navigation and audio information to performance settings data — all controlled via steering-wheel-mounted buttons.

The 96.8 cubic feet of cabin space, and the 14.2 cubic feet of trunk space remain unchanged. However, the rear seat also remains somewhat cramped when it comes to headroom.

Under The Hood: Our test vehicle was equipped with Buick’s turbocharged, direct injection, Dual Overhead Cam, 2.0-Liter 4-cylinder, with continuous variable valve timing, married to a 6-speed automatic. It puts 259 horses to the highway with 295 pound-feet of torque, which is spread from 2,500 to 4,000 rpm. Fuel economy is pegged at an EPA rated 21/City, 30/Highway for a combined rating of 24 — which is pretty much what we experienced.

Behind The Wheel: The 2014 Regal is comfortable to drive, and I had the opportunity to put some miles on it on a variety of terrains and circumstances.

The Buick’s overall sense of agility felt good, despite its nearly 4,000-pound curb weight. There’s not a lot of unexpected motion in the suspension, with a mildly firm, but compliant ride, that’s relatively quiet and comfortable.

The Regal, like most cars today, uses an electric, variable assist power steering system. I was pleasantly surprised by the feedback it gave, as some of these are way too soft for my particular driving style.

Acceleration is linear and predictable due to the horsepower and amount of easily accessible torque, while braking is strong and surefooted.

Whines: For some reason, Buick elected not to offer paddle shifters on either the Regal or the sportier Regal GS models. Not offering them as standard equipment is almost indefensible — especially when they cost so little to add.

Bottom Line: The 2014 Buick Regal is a pretty good value — stickering at $38,270 as tested. Obviously, it doesn’t have anywhere near the level of brand cachet as competing European sedans, but forgetting badge snobbery, the Regal holds its own — especially considering that it doesn’t run up the price with confusing, multiple add-on option packages like the Japanese and Germans, particularly BMW and Nissan. The Regal a capable performer that offers looks, comfort, and reasonable performance at a price point that won’t break the bank.