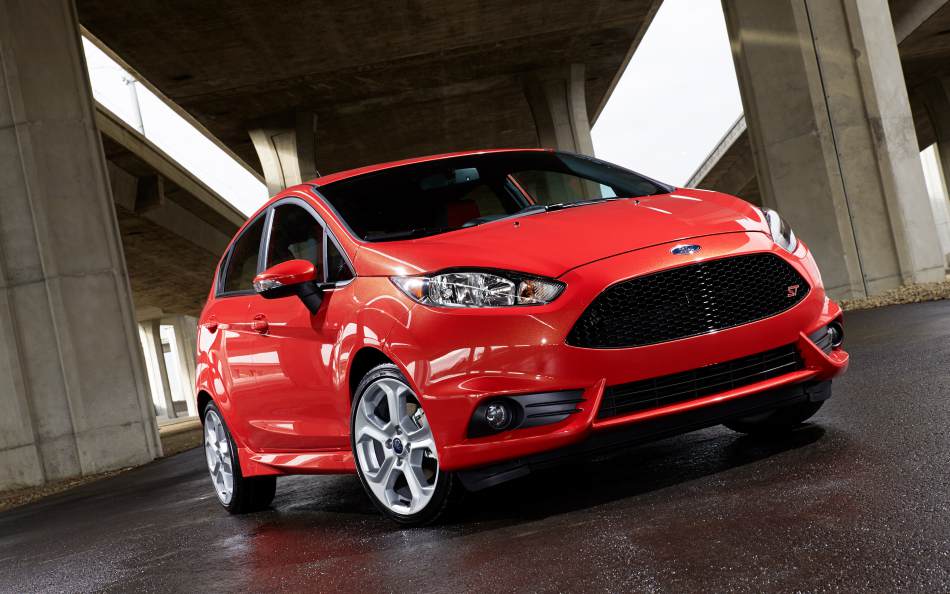 Available in both sedan and hatchback versions, we had the opportunity to drive the 5-door Hatchback Titanium and ST versions within two weeks of each other — the Titanium during a week-long visit in South Florida, and the ST back in the Pacific Northwest.

Main competitors for the hatchback include the Honda Fit, Hyundai Accent and Nissan Versa, while the sedan primarily stares down the Chevy Sonic.

One cool new feature is the MyKey technology, which allows owners — or parents — to set maximum limits on vehicle speed and stereo volume, and prevents deactivation of safety systems.

Model Lineup: There three basic model choices for the sedan and hatchback — the base Fiesta S; Fiesta SE; and top of the line Fiesta Titanium. The Fiesta ST is available in hatchback only and powered by a high-output, direct-injected version of the 1.6-liter four-cylinder engine that delivers 197 horses and 202 lb.-ft. of torque. A 6-speed manual is the only transmission choice.

Walkaround: While the updated styling helps to make the 2014 Fiesta five percent more aerodynamic than previously — and boosts fuel economy — the most noticeable change is the faux Aston Martin style grille that bears a strong resemblance to Ford’s Fusion sedan. The upper and lower grilles have switched proportions, with the long, lower grille smoothly flowing into reshaped foglamp housings. The Fiesta ST replaces the grille insert with black mesh. The headlamps are also new, but keep the upswept look of the 2013 model.

Deep hood lines give the Fiesta a more athletic look, while lines on either side of the large upper grille flow into wide, flared front fender arches.

In the rear, the sedan has sleeker, reshaped tail lamps and a more contoured deck lid, but retains its somewhat boxy shape.

The 2014 Fiesta rides on the same platform as the 2013,l with the wheelbase unchanged, but overall, it’s a half-inch shorter. 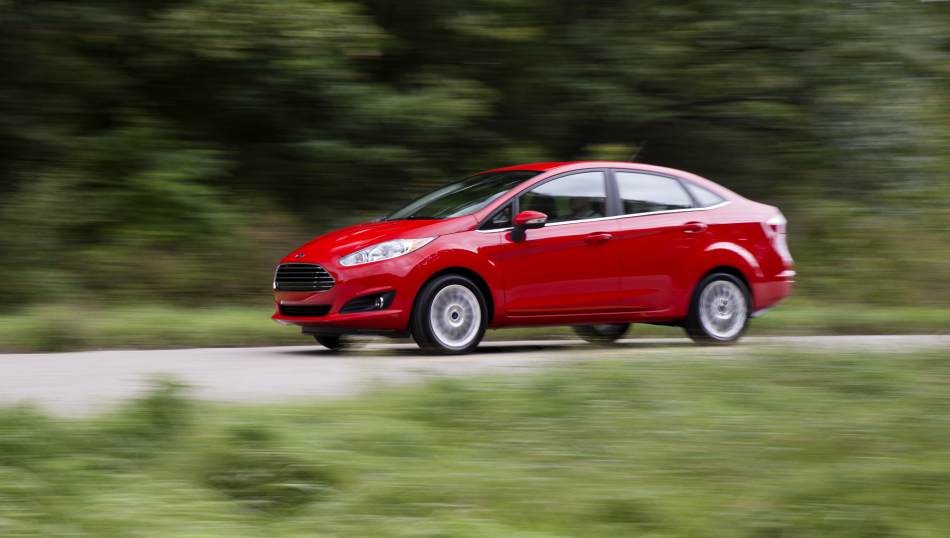 The Titanium’s heated leather front seats are comfortable, with plenty of side bolstering to keep occupants well-positioned. Our test ST had the cloth Rocarro sport seats, which because of their high sides, make getting in and out of, somewhat difficult, but are comfortable once you’re seated. 39.1 inches of front headroom will accommodate a six-footer. Front legroom measures about an inch more than both the Honda Fit and Nissan Versa Note.

Both our test vehicles featured the MyFordTouch system, with the voice-activated Sync interface, which allows users to control the audio system, pa 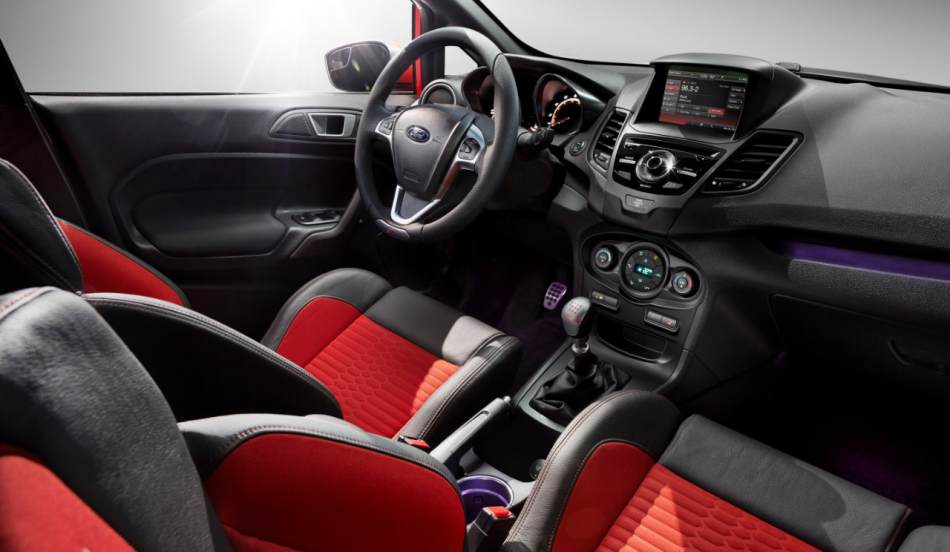 ir a phone via Bluetooth, access certain Ford-approved apps and get voice-prompted, turn-by-turn directions. The display screen sits deep into the instrument panel, shielding it from glare, making it easily readable in bright sunlight.

The small storage area in the center console s relatively narrow, but deep. Both our test vehicle’s center consoles had two full-size cup holders, and the storage pocket in the front door is large enough for a coffee mug or larger water bottle.

Rear headroom is nearly an inch less than the Nissan and nearly two inches less than that of the Honda, while rear legroom is significantly less than both.

When it comes to cargo space, the Fiesta sedan’s 12.8 cubic feet is on par with the rest of the class. The hatchback, however isn’t. With all the seats folded down, the maximum is 26 cubic feet — compared to the Nissan’s 38.3 and Honda’s cavernous 57.3.

Under The Hood: The 2014 Fiesta comes standard with a 1.6-Liter, 120-horse, four-cylinder engine that delivers 112 pound-feet of torque. It’s married to a 5-speed manual or 6-speed automatic. Optional on most models is a 6-speed dual clutch transmission Ford calls the PowerShift automatic. Our Titanium model was equipped with that.

Behind The Wheel: We found the 120-horse 1.6-liter engine perfectly adequate for tooling around town. It held its own on Florida’s I-95 — where the speed limit is merely a suggestion — once it got up to speed.

The sportier 197-horse ST held its own everywhere – from hills to freeways — with a lot more zip.

Steering was fairly precise on the Titanium, but seemingly sharper on the ST. Handling is easily controlled, with slight body roll through tight corners. Braking is strong and confident.

Whines: Microsoft has seemingly worked many of the bugs out of the SYNC system, so it functions most of the time — but not always. Too bad, because it’s the most intuitive, user-friendly of any automotive interface, but reliability has been an ongoing problem. There was moderate road noise at average to higher speeds. The internal cooling fan seems to run continuously.

Bottom Line: The Fiesta remains a great choice in terms of bold looks, value and driving dynamics. Even with two different drivetrains, we still found the Fiesta to be equally adept running errands around town as it was on the freeway, but falls shy when it comes to rear passenger and cargo space.