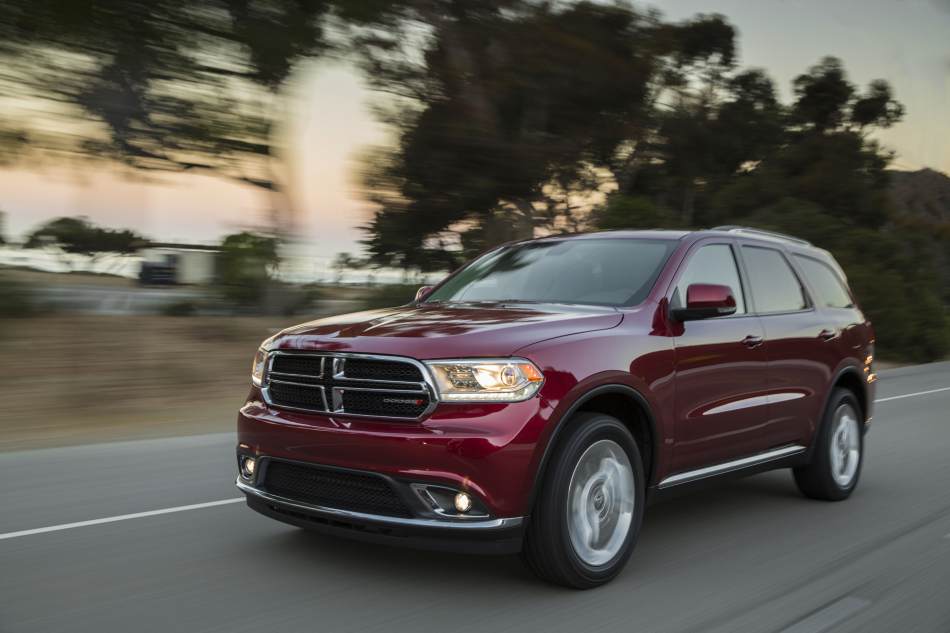 The 2014 Dodge Durango Limited AWD is a great SUV that manages to be both muscular and refined. The model has been around since 1998 and gone through a couple iterations. The present version debuted in 2011 and has been refreshed for 2014.

The 2014 Durango shares much with its corporate sibling, the Jeep Grand Cherokee (a better relative would be hard to find). It also has engineering influences from Chrysler’s former Daimler-Benz alliance. The Durango DNA is excellent.

The 5.7-liter Hemi V-8 and 8-speed automatic transmission are key components of the muscular, but refined nature of the 2014 Durango. 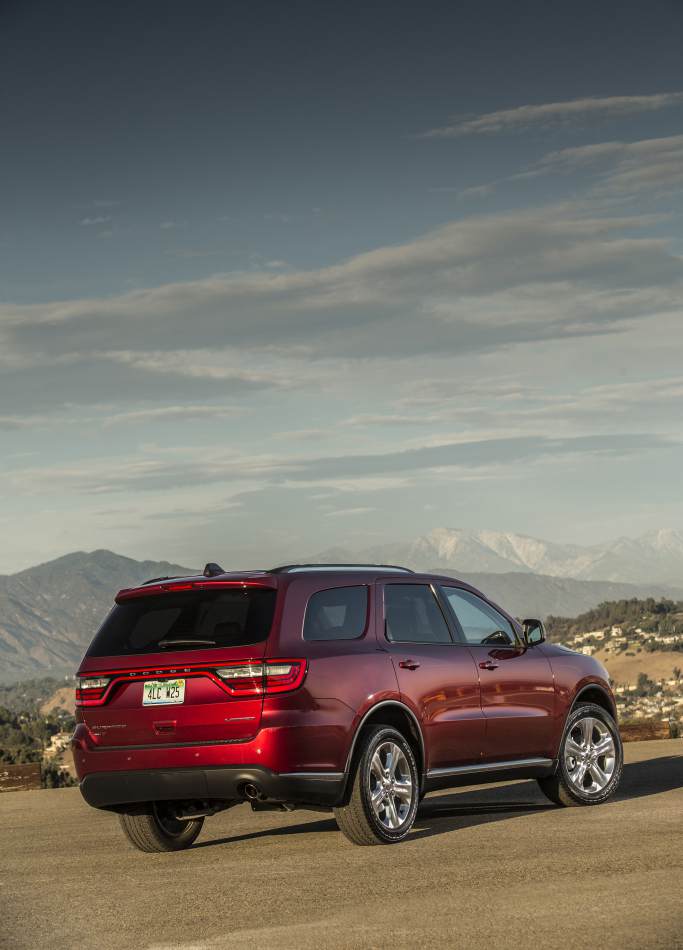 Walkaround: Chrysler Corp. including their Dodge Division has been hitting home runs in the styling department lately. Dodges have a strong high performance heritage and the current lineup plays to that strength. The 2014 Durango Limited is a great cross between truck, station wagon, and SUV. It doesn’t look as bulky/boxy as many competitors, but it’s far more masculine looking than crossover SUVs.

Out back there are modern LED (192 individual lamps) taillights that Dodge calls “Racetrack” style. They look sharp and positively let tailgaters know you’re applying the brakes. Handsome alloy wheels do a good job of properly filling the wheelwells. Sharp five-spoke 20-inch diameter alloy wheels were part of the Premium Group option on our loaded Durango Limited.

The Durango is longer than sibling Jeeps to accommodate the third row seating, but its proportions are excellent. The roof treatment reminds us of one of our favorite Dodge bodies, the recently dropped Magnum. 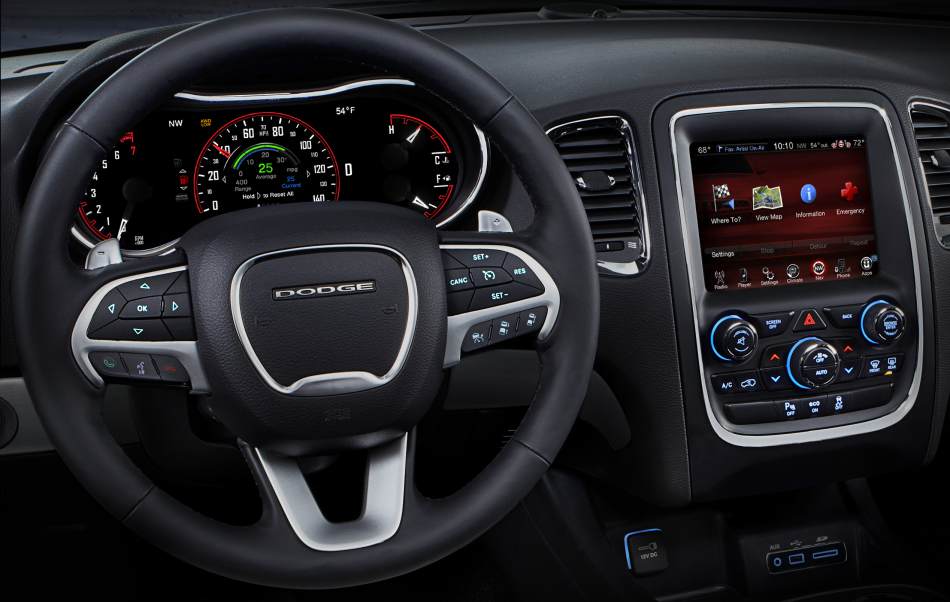 nt passenger room and comfort are big Durango selling points. Depending on the model, either six or seven people can be accommodated. Our Limited tester had the spacious second row captain’s chairs with a huge console between them. The captain’s chairs fold almost flat and the split third row seats fold completely flat for excellent cargo capacity. There is additional storage under the rear cargo deck. 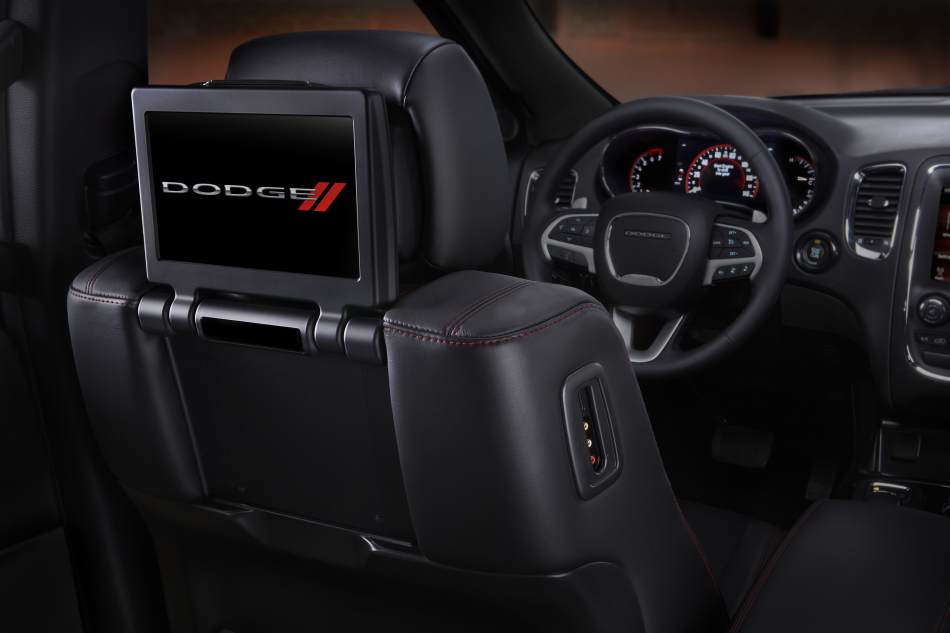 Front legroom is beyond stretch-out and second row room is fine as long as the front seats are up a little. Even the third row is relatively adult-friendly as long as your stay isn’t overly long. Space behind the third row is adequate for groceries or small packages. The liftgate is power operated.

Under The Hood: Dodges have long been renown for their powerful engines and strong transmissions. The new Durango excels in both areas. There are two engine choices for 2014: the 3.6-liter V-6, which is rated at 290 horsepower and 260 lb=ft of torque and the 5.7-liter V-8, which produces 360 horsepower and 390 lb-ft of torque. The V-6 is a strong engine and a fine choice, but we drove the might Hemi V-8. The engine easily lives up to its reputation.

The Hemi was mated to an impressive new 8-speed automatic transmission. The new transmission is responsible for almost a ten percent fuel economy improvement. There is an Eco Mode that adjusts engine/transmission performance mapping.

The transmission uses a selector dial on the center console instead of a traditional lever. It’s a good-sized knob and it becomes very natural after a few uses. The transmission does fine by itself, but there are paddle shifters for people who want to make their own gear choices. The console also houses a selector for AWD Auto and Low Ranges.

The Dodge Durango is available in rear-wheel-drive and all-wheel-drive configurations. V-8 models can tow up to 7,400 pounds.

Behind The Wheel: Even though the Dodge Durango has chassis architecture based on the Mercedes GL and ML series SUVs it feels most at home on the highway. The Durango is definitely tough enough for off-road travel, but its drives more like a big near-luxury sedan. That’s a good thing given the ratio of paved to dirt road travel seen by most owners. 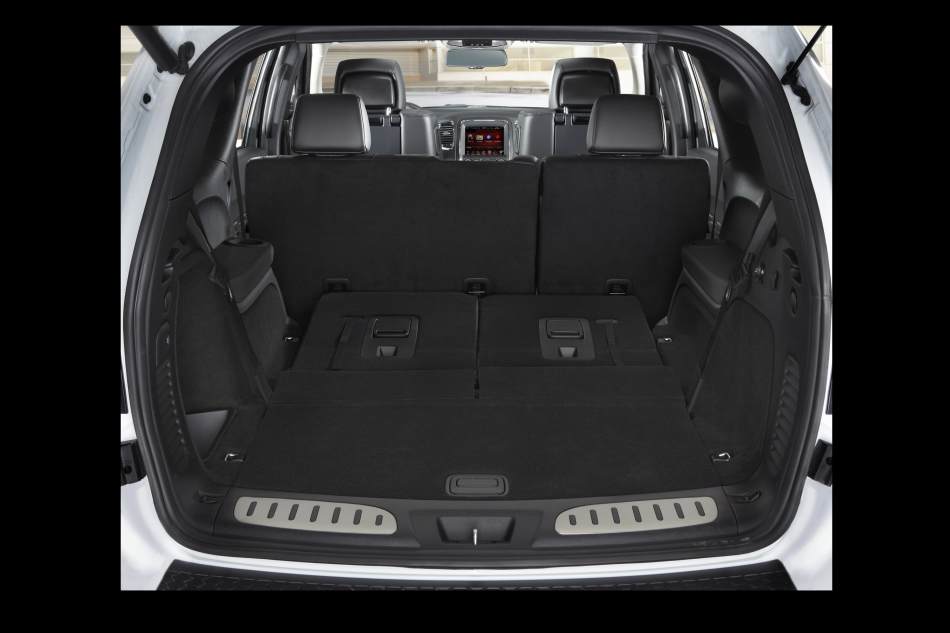 Steering and handling is very good, especially for a vehicle this size. The ride is moderately firm, but not harsh. The Durango isn’t a sports car, but it handles much better than most truck-based SUVs. The Hemi exhaust note is loud enough to be noticed (a positive for us), but not raucous.

Whines: Aggressively checking option boxes can easily add ten thousand dollars to the attractive base price. Our tester started at $38,395 and topped out at $49,960 after options and a thousand dollar delivery charge. The Durango is well built and has a high content level, but 50K for a Dodge strains our traditional perception of Dodges as Chrysler’s entry-level nameplate.

The strong performance comes with a fuel economy penalty. Our Durango had the powerful 5.7-liter Hemi V-8, which was EPA rated at 14-city and 22-highway with a combined rating of 16-mpg. We beat the combo number on more highway than city driving, but never got to 18-mpg.

Getting in and out of the third row seats isn’t difficult, but a well-placed grab handle would improve access.

Bottom Line: The 2014 Dodge Durango Limited AWD is a very impressive multi-purpose SUV. We thoroughly enjoyed driving and using it. The high content interior and excellent drivetrain are two giant pluses along with the handsome styling.