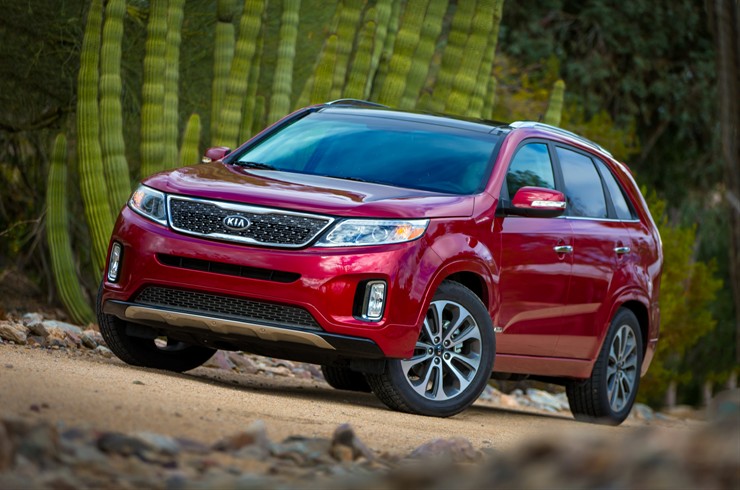 The popular Kia Sorento, Kia’s flagship SUV, has received a major update for the 2014 model year. It could be viewed as a mid-cycle refresh, although Kia marketeers are careful not to use the term “all new,” the Sorento sports about 80 percent new and/or re-engineered content, with a list of revisions much more extensive than the usual mid-cycle facelift.

The 2014 Sorento, like every vehicle in this class, is front-wheel drive with an all-wheel drive (AWD) option and unibody design. It boasts cosmetic updates front and rear, an optional new V6 engine, a re-engineered chassis that might as well be called new, numerous suspension changes, improved braking, a new electric steering system, an upgraded interior, plus new infotainment and telematics.
Structural improvements include a higher percentage of high strength steel for an 18 percent increase in torsional rigidity that contributes to more precise handling and first-rate crashworthiness.
The Sorento competes in the compact crossover segment, where it has a distinct size advantage against the Honda CR-V, Mazda CX-5, Toyota RAV4, and Ford Escape.
Kia and Hyundai (Hyundai owns a stake in Kia) have made huge strides in quality in recent years, and the Sorento comes to market with a long list of standard features even in base LX model.
Model Lineup: The 2014 Sorento comes in four trim levels — LX, EX, SX and Limited. All come standard with a 3.3-liter V6 except the base LX, which comes with a 2.4-liter four-banger. A 6-speed automatic transmission with front-wheel drive is standard on all, with AWD optional, as is a third row seating package.
Walkaround: The 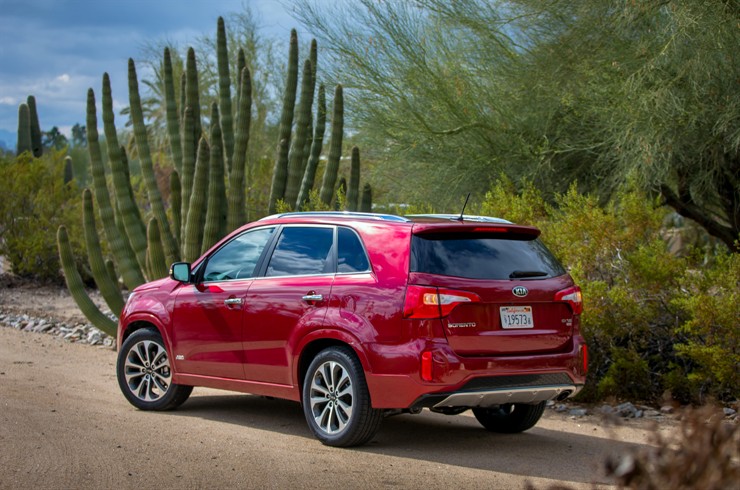 Kia Sorento is classified as a compact crossover utility, but is big by the standards of the class. It shares many structural and powertrain commonalities with its sibling Hyundai Santa Fe. However, while the Santa Fe is available with two different wheelbases for 2014, the Sorento is restricted to the same 106.3-inch wheelbase as the Santa Fe Sport.
Front and rear styling updates give the Sorento a wider, somewhat more aggressive stance, and the subtle effect is aided by moving the optional fog lamps out to the edges of the bumper and changing from horizontal to vertical. The most distinctive change is a semi-circle of LEDs flanking each projector beam headlamp, and also illuminating rear turn signals and back up lighting. 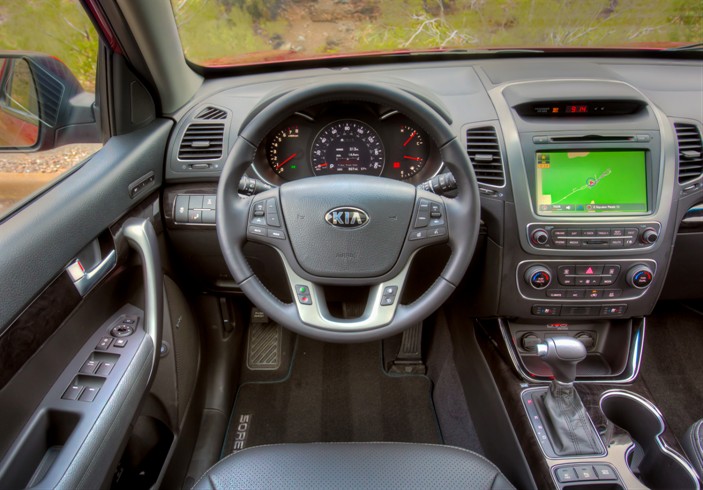 Interior: The Sorento’s interior features serious upgrades from the previous model, with higher-grade materials throughout that have the look and feel of a more expensive vehicle. Instrumentation is redesigned, there’s a new electric steering system (Flex Steer) with three driver presets, and enough electronic connectivity options with Kia’s new UVO system to connect with anything anywhere.
The new instrumentation includes a seven-inch LCD screen (8-inch with optional Navigation), an analog tach, and trip information.
Higher trim levels include fashionable touches such as heated and ventilated leather power front seats, front and rear dual zone auto climate controls, premium audio, pushbutton starting, leather-wrapped steering wheel, second row sliding sunshades, illuminated door handle pockets, and a 115-volt power inverter — not to mention a large power sunroof, with a power-operated shade, plus a programmable power rear liftgate.
The Sorento’s somewhat larger size pays off in interior roominess, as it continues to offer a three-row, seven-passenger seating configuration.
The Sorento does boast lots of cargo capacity — 72.5 cubic feet with the middle seats folded flat, and almost 40 behind the middle seats in five-passenger configuration. That leaves room to haul lots of plants, potting soil, and tools home from your local nursery, as well as everything from your trek to Costco. 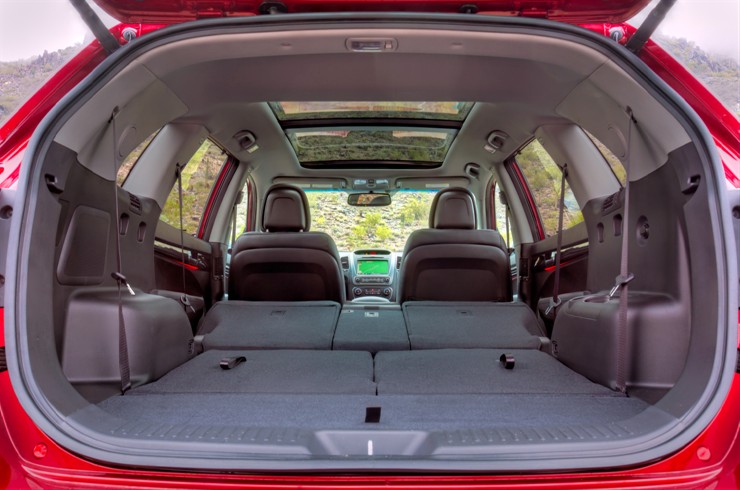 The 2014 Sorento also offers a sonar-based blind spot monitor system — a first for Kia. Like other blind spot systems, it tracks vehicles in the rear quarters and provides visual alerts, followed by audible warnings if the driver begins to move into the occupied lane.
Under The Hood: The 2014 Sorento’s optional new 3.3 Liter V6 engine is rare in this class. The Mitsubishi Outlander is the only competitor offering a V6. The powerplant utilizes direct injection to deliver 290 horses, and 252 pound-feet of torque. It replaces the previous 3.5-liter V6. Fuel economy is an EPA-estimated 18/25 City/Highway, 18/24 with AWD on regular gas.
Only the base Sorento LX comes with a four-cylinder engine. New for 2012, the 2.4-liter four-cylinder with GDI direct injection is rated at 191 horses, and 181 pound-feet of torque. Fuel economy is EPA rated at 20/26 City/Highway, 19/24 with AWD.
Behind The Wheel: Our initial test drive was in Arizona behind the wheel of loaded, V6 AWD SX. There were no four-cylinder LX models at the event. I later drove it again in the Northwest Automotive Press Association’s annual SUV competition, Mudfest, which is recognized as the most grueling off-road event in the nation for factory vehicles. Although the Hyundai Santa Fe Sport won the class they were both in at Mudfest, the Kia Sorento is almost the very same vehicle underneath the sheet metal. The scoring, which is done by 30 different journalists driving every vehicle, was subject to the whims of the person doing the scoring, but was reportedly very close.
Designed to automatically and instantly transfer 100 percent of power to the wheels with traction at either end of the vehicle, the sophisticated AWD system is essentially transparent in operation, although the nature of the Arizona drive route didn’t give us any reason to find out. The too-short run from Globe back to Scottsdale on fairy smooth, semi-winding two-lane roads offered little in the way of challenge aside from avoiding radar gun-wielding local law enforcement.
However, I did have the opportunity to take the SX from Scottsdale to Sedona by myself later. Cruising through the mountains on Highway 87 to the junction at 260, was much more challenging in terms of handling and acceleration. Coming back on I-17, I found the 75 mph speed to little more than a suggestion, because at 90, I was often holding up traffic.
Both ways, I found the 3.3-liter V6 to be smooth and generally quiet, as was the 6-speed automatic, which handled downshifts for passing or hill-climbing effortlessly. Ride quality is quiet, smooth, yet firm enough to convey a sense of confidence at higher speeds, and the new Flex Steer option, particularly in Sport mode, adds a more fun to it. After experimenting with all three settings, I left it in Sport, which delivered the best feel. The larger brakes are much improved as well.
Whines: Personally, I think the Sorento is better as a two-row, five-passenger vehicle. Adding that third row consumes a fair amount of cargo space, with third-row legroom at a premium.
Bottom Line: One knock on the previous Sorento was interior noise at freeway speeds. No longer. This is a much-improved version of what was already a pretty darn good vehicle.