2014 Honda Accord: Gas or hybrid? Which is right for you? 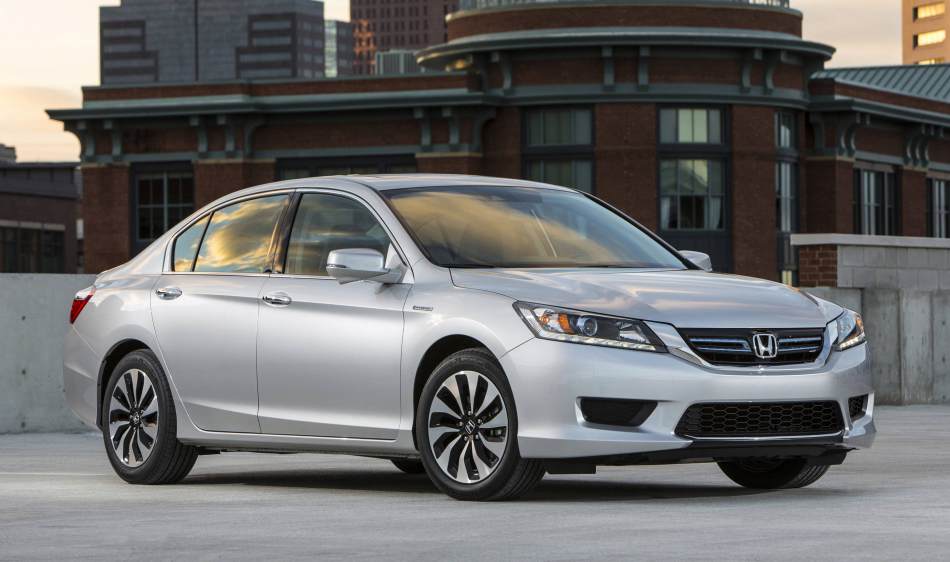 We recently had the opportunity to test drive the 2014 Honda Accord EX-L standard gas version, and the TRG gas/electric hybrid version of the EX-L in back-to back weeks. Both cars were similarly equipped, and this will be a comparison review.

Both an all-new Accord sedan and coupe were introduced last year, and only minor updates have been made for 2014. However this year saw the debut of a regular gas/electric hybrid model and a limited-production, plug-in hybrid as well.

Honda products in general have a history of reliability and high resale value. Although much like its main competitor, the Toyota Camry, the Accord has also always been somewhat mundane. However, it is the benchmark for this particular market segment that includes the Nissan Altima, Ford Fusion, Subaru Legacy and VW Passat.

The Accord model lineup seemingly offers something for everyone — well almost anyway. The Accord doesn’t come in an all-wheel drive version like the Fusion or Legacy, nor is a diesel option like the Passat offers.

Model Lineup: The 2014 Accord, and Accord Hybrid 4-door sedans are offered in three trim levels — LX, Sport, and EX/EX-L. There’s also an EX-L Touring version.

Except for choosing an automatic transmission in the LX model instead of a manual, major options for the 2014 Accord come with moving up the trim level scale. Among the most desired available options are the V6 engine, satellite navigation, Sirius/XM satellite radio, a 7-speaker/360-watt audio system, 18-inch wheels, leather seating, the multi-angle rear-view camera, HomeLink remote system, LED headlights, blind-spot display, and adaptive cruise control. Additional personalization accessories include a sport grille, underbody kit, rear spoiler, remote engine-starting unit, and illuminated doorsill.

The Sport model adds a power driver’s seat, 18-inch alloy wheels, and a small horsepower increase, while EX models include a power moonroof and the LaneWatch system.

Hybrid models include LaneWatch, LED daytime running lights and a 10-way power driver’s seat. Moving up from the base trim to the EX-L also adds heated front seats along with lane departure and forward collision warning systems. The Touring trim adds a navigation system, Honda’s Homelink technology, and adaptive cruise control. All 2014 Accord Hybrids are equipped with 17-inch wheels.

Walkaround: The Accord sedan is more than three inches shorter and more rounded than the previous generation, but it’s still easily identifiable as an Accord. The grille boasts classy horizontal bars with the Honda badge stationed in the middle. The sedans have a low beltline where the side windows meet the sheet metal to offer improved visibility — especially for rear seat passengers. The EX and EX-L add premium touches such as LED brake lights and daytime running lights. Other than that, not much has changed from the 2013 redesign.

Interior: The interior of both the Gas and Hybrid versions feature the same quality of materials and the same level of comfort, functionality, and technology, including a USB and iPod ports. Other than the instrumentation displays and the powertrain, there’s seemingly no difference in these two vehicles inside or out.

Visibility is excellent from the driver’s seat, and thanks to the low beltline, from the rear seats as well. Honda’s LaneWatch camera system — standard on all trim levels — displays the image of the driver’s right-side blind spot when the right turn signal is activated.

Under The Hood: There are two engine choices and three new transmissions offered in gas-powered versions of the 2014 Accord. The base is a 2.4-liter 4-cylinder that delivers a healthy 185 horses (189 in the Sport version), and was the powerplant in our test version. The optional engine is a 3.5-liter V6 that harnesses 278 horses. In the sedan, 4-cylinder engines are linked to a 6-speed manual or Continuously Variable (CVT) automatic, and V6 engines are connected to a 6-speed auto. Both our test vehicles were equipped with the CVT.

The Accord Hybrid utilizes a 2.0-liter 4-cylinder, dual-overhead cam, Atkinson cycle, i-VTEC gas engine rated at 141 horses with 122 lb-ft of torque married to a pair of electric motors. The combination delivers 196 horses and 226 lb-ft of torque to the Accord Hybrid. Honda’s CVT replaces a traditional transmission by using the electric motor to send power to the front wheels during both city driving and highway cruising.

Behind The Wheel: The difference between the performance of the two Accords is in the eye of the beholder. Ride quality, comfort and quietness in general is pretty pleasing for either Accord, with improved noise reduction over previous models.

Steering in either offer little in the way of feedback and is about as numb as anything else in this class — except perhaps the Fusion. The Accord Hybrid’s regenerative brakes have a nice, solid feel, and lack the jerkiness found in some other hybrid systems.

The Accord’s various powertrains offer different driving experiences, but most buyers will gravitate toward 4-bangers with automatic transmissions. The 4-cylinder gas version has good power for acceleration and passing, yet according to EPA figures, is still rated at a highly respectable 36 mpg/highway. The clue you’re driving the hybrid occurs when strong power is suddenly needed, and you experience that lethargic rate of acceleration hybrids are known for. However, unless you have to put the pedal to the metal, everyday cruising feels pretty much the same in either Accord. The transitions from gasoline to electric are smooth, and the Accord is noticeably quiet when running on electricity alone.

EPA ratings for the 2014 Accord Hybrid are 45/city, 50/highway, with a combined rating of 47 mpg. The gas version is 27/city, 36/highway for a combined 30. We found those numbers pretty spot-on. If you lighten up on your right foot you can exceed them.

Whines: I’m not a fan of CVTs in general – not just Honda’s. Under hard acceleration, to me at least, they sound and feel ‘60s-era cars with slipping automatics.

Bottom Line: Either Accord is pretty good. Personally, I’d opt for the hybrid. It utilizes some advanced technology to become what I believe hybrids should have always been — ultra-economical versions of mainstream vehicles so similar in feel and driving dynamics that except for increased fuel economy, most consumers wouldn’t notice the difference.

In the entire week we drove it, we didn’t have to buy gas and returned it with over half a tank left. The combination of its on-road feel and outstanding mileage make it a more than serious contender for the Toyota Prius, Chevy Volt, and Ford Fusion Hybrid, among numerous others.