By Lary Coppola
In contrast to many recently redesigned, and restyled large crossover competitors, the 2014 Honda Pilot SUV is relatively unchanged since the second-generation Pilot debuted back in 2009. While its age is a disadvantage in a few key areas, its major plus is ample room inside, which continu 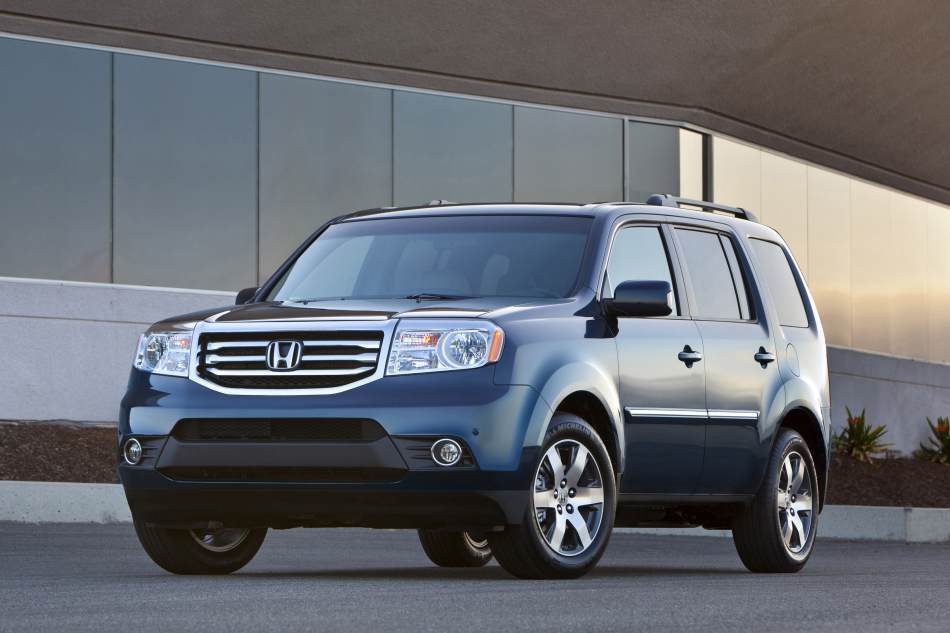 es to make the 2014 Pilot a solid choice for buyers needing seating for eight and more than a little flexible cargo space.

The 2014 Pilot could be considered the “elder statesman” of this segment, scoring high in overall utility and comfort — which counts for a lot in a family vehicle. But it’s becoming a little long in the tooth and rival three-row crossover SUVs — like the Hyundai Santa Fe, Nissan Pathfinder, and Chevy Traverse — all boast comfortable three-row seating plus appealing interior designs. From a performance standpoint, the Dodge Durango and Mazda CX-9 are perhaps best in class, but if utility and reliability are your primary concern, the Pilot is still a strong choice.

Upgrading to the Pilot EX-L gets you leather upholstery with heated front seats and power passenger seat, a sunroof, power liftgate, auto-dimming rearview mirror and Sirius/XM satellite radio. A rear-seat entertainment system, or voice-activated navigation are both available, but not together in the EX-L.
The top-of-the-line Touring version features both of those EX-L options, as well as roof rails, parking sensors (for the rear and front corners), driver seat memory functions, a 115-volt power outlet and a 10-speaker premium sound system, all standard.

Walkaround: Built in America at Honda’s Lincoln, Alabama plant, nothing has really changed from the basic second-generation boxy look that debuted in 2009, except for some minor upgrades and refinements. 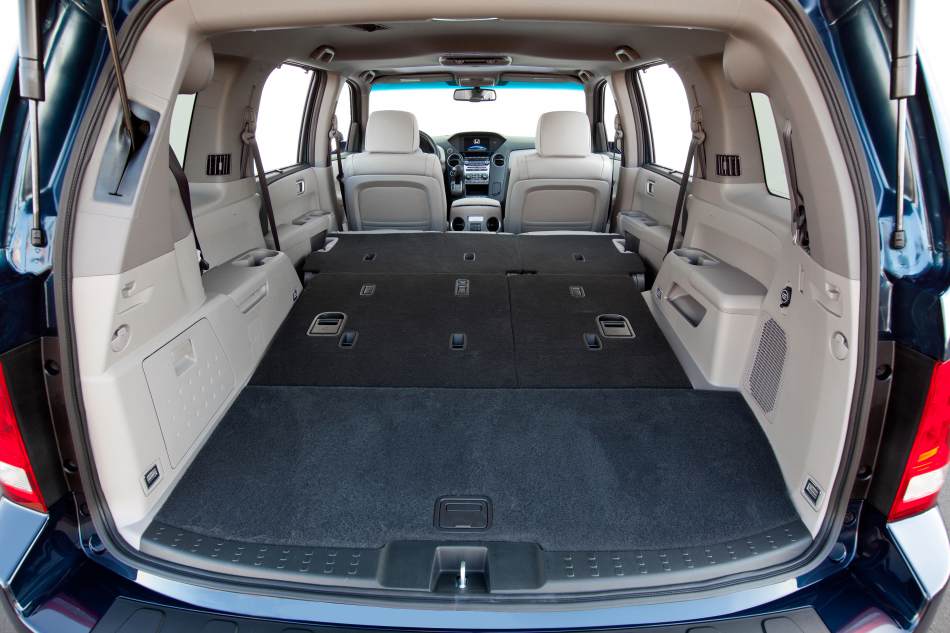 Interior: One thing the 2014 Honda Pilot has, is plenty of room inside. This is a true eight-passenger vehicle, as even the third-row seats can accommodate adults. While the Pilot’s boxy architecture won’t win any styling awards, it does offer adult headroom and a large, more conveniently shaped cargo area. Drop the rear seats and you’re ready to fill the 87 cubic feet of space. Although slightly less than some of its rivals, the Pilot’s boxy shape allows it to accept bulkier items with ease that some competitors can’t. There are also lots of smaller, thoughtful storage spaces throughout the cabin. The downside of the Pilot’s interior is that it strikes us as a couple steps down from the nicely appointed Honda Accord. Otherwise, the interior design is useful, with thoughtful details. 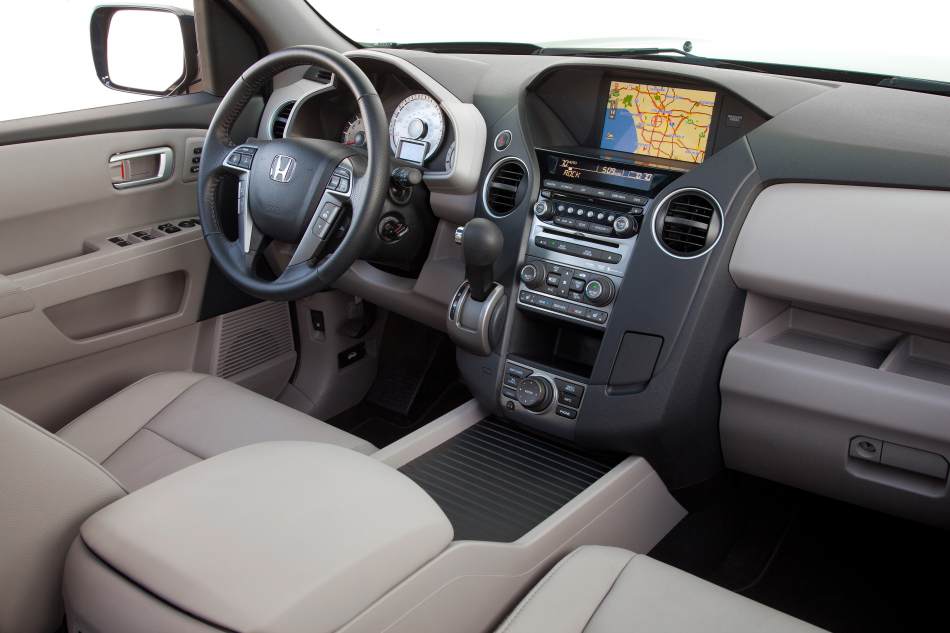 and easy to read at a glance. The standard 8-inch information screen on all trim levels, coupled with automatic climate control, also helps reduce the number of buttons and knobs on the center stack.
Standard safety features include antilock brakes, traction and stability control, front-seat side airbags and full-length side curtain airbags. A rearview camera is standard, and the Touring comes with parking sensors.

Under The Hood: All 2014 Honda Pilots, regardless of trim level, use the same powertrain — Honda’s 3.5-liter, 250-horse, V6, delivering 253 pound-feet of torque, and married to a 5-speed automatic. Front-wheel drive is standard, but All Wheel Drive (AWD) is available on all Pilots. The AWD system automatically shifts as much as 70 percent of power to the rear wheels if the front tires begin to slip. Get the Pilot stuck, and a driver-selectable “lock” feature moves maximum torque to the rear wheels in first or second gear at low speeds.

Behind The Wheel: Overall, we found the 2014 Honda Pilot a very pleasant vehicle to drive. It does feel like the large, heavy vehicle it is, with a quiet, cushy ride that readily smoothed out rough pavement. As expected, because of its boxy shape and slow steering, agility around tight corners is somewhat lacking. Braking wasn’t as strong as some of its competitors either.

Performance of the Pilot’s 250-horse V6 is hampered somewhat by the slow-shifting five-speed automatic, as well as the Pilot’s sheer heft. On the plus side, the front-wheel drive Pilot can tow 2,000 pounds, while properly equipped AWD models are rated for 4,500 pounds.

Whines: Unlike most other three-row crossovers, the Pilot’s third row provides genuinely acceptable room for adults. However, the low seating position makes for a knees-up ride. The Chevy Traverse and Ford Flex offer a little more comfort in this regard. The Pilot shows its age in regard to feature availability. Blind-spot monitoring, keyless ignition/entry or second-row captain’s chairs — features offered on competing crossovers — aren’t available. A six-speed transmission would also help performance.

Bottom Line: Although showing its age somewhat, the smooth-riding Honda Pilot is still a very serious competitor in the segment, offering comfort. cargo space, utility, and genuine third-row seating not found in most of its competitors.