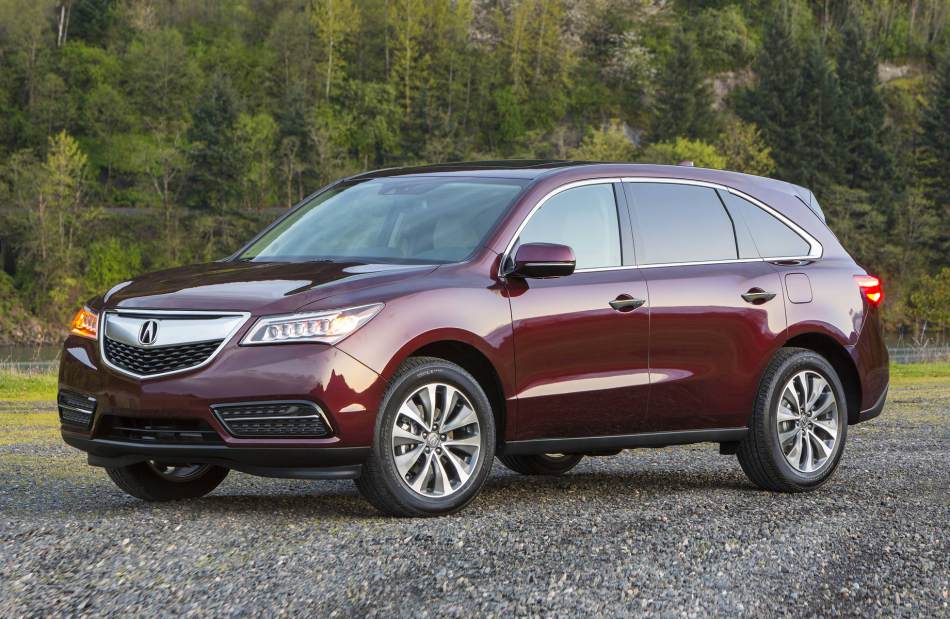 Seven-passenger SUVs have improved dramatically from those early truck-based, gas-guzzling monsters like big-block V-8 ’70s/’80s Suburbans and first generation V-10 Excursions. Minimal sound insulation, harsh ride dynamics, and single or low double-digit fuel economy figures are a faint memory thanks to the current generation of innovative SUVs such as the 2014 Acura MDX.

We recently tested a top-of-the-line 2014 Acura MDX with Advance, Tech, and Entertainment packages. The overall experience was much more like a luxury sedan than a vintage pickup truck. We recorded highway fuel economy numbers over thirty miles per gallon while cruising in total comfort and safety with room for seven occupants. With some or all of the back seats folded down there was room for large amounts of cargo.

Walkaround: The 2014 MDX looks like an SUV, but with more sedan/sport wagon influences than earlier iterations. The grille is distinctively Acura. The most noticeable change is the five-lamp LED headlights (great lighting). Panel fit and finish are excellent.

Interior: Acura interiors have well deserved reputations as outstanding blends of space, comfort, quietness, and technical innovations. The 2014 MDX is no exception. The MDX is a three-row seven-passenger SUV. The first two rows are very spacious and the third row is fine for smaller or occasional passengers. The second row seats have several inches of travel that benefits third row passengers. Third row access is pretty easy thanks to a clever release system on the outboard second row seats.

Cargo capacity is substantial. Both second and third row seats fold flat in a variety of combinations. The rear doors and tailgate are all oversized, which eases cargo handling. The tailgate is power operated. There is extra storage under the floor and lots of small item bins.

Active noise cancellation is a great feature that contributes to the quiet cabin. Noise-insulating glass is used throughout the vehicle. Even the engine mounts were designed to minimize vibrations.

Under The Hood: Smooth, refined, and powerful are adjectives that describe Acura engines. Acura has long been a benchmark company for highly sophisticated V-6 engines. Early Acura engines did much to dispel the notion that V-6 engines in luxury cars were inferior to V-8s.

The MDX version of the reliably excellent Acura 3.5-liter V-6 produces 290 smooth horsepower and 267 lb-ft of torque. It’s not a muscle car, but when the six-speed automatic transmission is placed in the “sport” mode the MDX moves out quickly. Performance is especially impressive given the vehicle’s considerable heft and passenger capacity.

Fuel economy is very impressive. The EPA rates the all-wheel-drive MDX at 20-mpg city and 28-mpg highway. We drove to Portland and back recording 31.5-mpg on the way down and 30.1-mpg on the return trip. Those figures were obtained at above posted limits (and below ticket speeds) without using cruise control. At the end of our 425 miles in the MDX the trip computer posted an overall average of 27.7 mpg.

Behind The Wheel: We put a lot of very pleasant miles on the MDX. The quiet, roomy interior and smooth highway ride make the MDX an excellent vehicle for long family trips. Driver comfort and visibility are superb. Legroom and headroom are very generous. The front seats are heated and ventilated with power lumbar support and 10-way adjustability.

Long trips can dull a driver’s attention, but the sophisticated safety features will keep you securely in your own lane. With the Advance Package those features include lane departure warning and lane keeping assist. The lane keeping assist feature actually helps steer the MDX back into the proper lane.

If you’re not paying super close attention to following distances or a suddenly slowing vehicle there is a forward collision warning feature and a collision mitigation braking system that can apply the brakes before you react. We like the Blind Spot Information system in congested traffic. There is adaptive cruise control with a special low speed following feature.

Besides all these high-tech features the MDX is loaded with airbags including a new driver’s knee airbag. The side curtain airbags are tied to a rollover sensor.

The smooth ride can be fine tuned with a Driving Dynamics System. Setting choices are normal, sport, and comfort. Most MDX owners will remain on paved roads, but the SH-AWD (super handling all-wheel-drive) 4×4 system (front-wheel-drive is standard) automatically varies power distribution depending on the traction conditions for each wheel. The system is ideal for nasty weather and snowy mountain passes. We’ve gone off-roading in an MDX without any problems, but its luxury nature doesn’t encourage back road bashing.

Whines: We’re stretching for anything to complain about. The styling is fine, but it doesn’t excite us. The engine requires premium fuel.

Bottom Line: The 2014 Acura MDX is a wonderfully engineered, technically innovative, and beautifully packaged multi-purpose vehicle. It’s not sensual or viscerally exciting, but it does everything exceeding well and it’s a joy to drive and ride in.