December 18, 2012 - Reviews - Comments:
By Lary Coppola
By Lary Coppola
The Toyota Prius c is not a Yaris with gas-electric hybrid powerplant, and it’s not just a shortened-up Prius. It is a Prius with a gasoline-electric hybrid powerplant that was mechanically cross-pollinated — for lack of a better term — with the compact four-door hatchback Yaris. 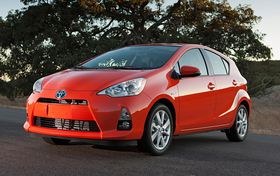 The Prius c boasts the low emissions and fuel economy of eco-oriented hybrids like the larger Prius — but it’s smaller — 19 inches shorter and 500 pounds lighter — and substantially cheaper — at least $5,000. EPA rated at 53mpg/city, at $4 a gallon it will take you 450 miles on $36 worth of gas. It may also qualify for a tax incentive or carpool-lane access sticker in some places.

The Prius c has no direct hybrid competitors, but in this price range you’ll find the Honda Fit, Chevrolet Sonic, Ford Fiesta, Hyundai Accent, Kia Rio and Volkswagen Golf diesel. Some come close to the highway mileage of the Prius c — but none match it in the city.
Walkaround: The Prius c looks like a conventional hatchback. After all, there are only a few ways to position an upright rear end, four doors and the hood on a 13-foot-long vehicle. However, the Prius c is easily recognizable as a Toyota.
A character line flows from the lower edge, up over the dual grilles, culminating at the Toyota badge in the center. Triangular-shaped outer corners house fog lights on the top models, and the projector headlamps are molded smoothly into the sheet metal.
The front door’s relationship to the door cutouts and roofline mimic the regular Prius with its high point at the B-pillar. However the roofline is taller, resembling the Prius v.
At the rear, the sheet metal above the centerline angles rearward, with arches that carry over the wheels and around the rear resembling a motorcycle fender. While the Prius c uses LED-lit brake lights, conventional bulbs illuminate taillights and amber bulbs behind a clear lens for signals.
Cargo access is straightforward and a temporary-use spare is under the floor. Any flat tire will go in the well but the cargo floor won’t be flat.
Model Lineup: The 2012 Toyota Prius c comes in four models, called One, Two, Three, Four. All share the 99-horsepower gasoline-electric hybrid powertrain, power steering and brakes, and four-door hatchback configuration.
Safety features on all Prius c models include dual front, dual front-side, dual front-seat cushion, front and rear side-curtain and driver-knee airbags, anti-lock brakes, electronic brake-force distribution, VSC electronic stability control, traction control, brake assist, Smart Stop Technology, tire-pressure monitors, and a proximity notification system for pedestrians and cyclists. A rearview camera is not available, however.
Interior: There’s nothing groundbreaking, but some unusual design, and level of standard features. Materials are mostly plastic with a few padded soft-touch panels. There’s a tilt/telescoping steering wheel with redundant controls, though the range of the telescopic function is very short. The floor-mounted shifter is standard with PRNDB settings — with B for battery. Eco and EV mode switches are adjacent the handbrake.
The front seats are roomy enough for 6-footers, comfortable enough for medium-length drives, and on most models the driver’s seat adjusts for height.
Although the rear seats are configured for three adults, two adults or three kids is about it with any degree of comfort and room. The rear seat folds to increase cargo area, and on all but the One model, and has a flexible 60/40 split.
A power port sits below the climate panel, and the USB/auxillary inputs are in a tray above the glovebox.
Instrumentation features a digital speedometer, and fuel level, while a multi-information display provides fuel and energy data with numerous views.
Bluetooth and steering wheel controls are standard on every Prius c, while the top two models get Entune — Toyota’s telematics system. It comes with Bing, Pandora, sports, stocks, traffic, weather, iHeartRadio, MovieTickets.com and OpenTable. Sirius/XM and HD audio with iPod connectivity and iTunes tagging come with Navi/Entune vehicles, along wi
th Bluetooth streaming. Entune access is complimentary for three years — 24 to 33 months longer than most similar services.
Under The Hood: The Prius c is all about fuel economy and low emissions, with the highest EPA ratings of any car without a plug. The basics of the propulsion system are the same as the standard Prius, but on a smaller scale.
Power is courtesy of a 1.5-liter four-cylinder gasoline engine coupled with a pair of electric motors and a 144-volt, 0.87-kilowatt hour battery pack beneath the rear seat. Each of the electric motors serves a different purpose and the computer that runs it all sends a maximum of 99 total horsepower to the wheels, with a power-to-weight ratio similar to the larger Prius.
The Prius c will run up to 1.5 miles on battery alone while staying under 25 mph with a very light foot, although acceleration or speed engage the gas engine much sooner.
An electronically controlled continuously variable transmission (CVT) doesn’t work the way most CVTs do but the results are similar. To keep engine and electric motor speeds in the most efficient range for the required performance needs, the speeds are variable.
EPA ratings peg the mileage at 53/46 mpg City/Highway, or 50 mpg Combined. We averaged 50 mpg in mixed driving.
Behind The Wheel: Prius c shares some platform features with the Yaris and rides and handles much the same as most compact cars. The Prius c has a pretty solid ride, only seeming bouncy on bad roads. It’s relatively flat in corners because the weight from the battery positioning gives it a low center of gravity for predictable handling.
The brake pedal triggers regeneration while the drivetrain uses the car’s momentum to recharge the battery pack.
Whines: No model offers adjustable height shoulder belt anchors and tall passengers end up with the belt across their upper arm.
Bottom Line: Strengths of the Prius c are the best mileage of anything without a plug, good maneuverability, electronics for the tech-savvy, and relatively low pricing for an eco-friendly hybrid. With moderate purchase and operating costs, it’s an ideal urban vehicle.