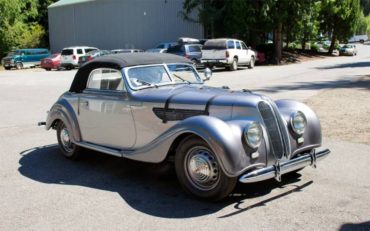 Everyone has heard of BMW, which stands for Bavarian Motor Works. But how many of you have ever heard of an EMW, which is short for Eisenach Motor Works? Not many, we’d hazard to guess. But here’s the story on this rare brand.

In November 1928, BMW acquired the company and its Eisenach factory became the birthplace of what has evolved into today’s BMW.

However, at the start of World War II, BMW operated two factories. One was located in allied-controlled Munich and the other in Eisenach, which by that time was occupied by Russia.

In 1942, regular automobile production was stopped because of the war and the Eisenach factory started to manufacture motorcycles as well as aircraft engines for the Luftwaffe. By the end of the war, about 60 percent of the factory had been destroyed and most of the classic BMW dies, tools and plans were lost due to bombings and evacuations. However, a forward-thinking group of engineers from the Eisenach plant hid their equipment in underground tunnels and bunkers to avoid detection and destruction. 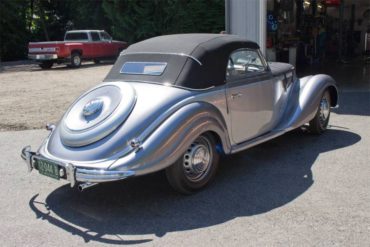 After the Iron Curtain fell across Germany, what was left of the Eisenach plant was at first doomed to close. But as the war shifted to other fronts outside of East Germany, those engineers were able to convince their new occupiers — the Soviet military administration for Germany — that the production and sale of postwar vehicles was a viable means to pay reparations and help finance what had been an expensive war.

When the owner moved from California to Gig Harbor, he chose Jim’s Classic Garage as the place to care for his prized collection of Nifty Fifties cars.

All were original and in Concours condition. The owner decided that Jim’s was the place for some of his cars while he built a new facility to house his collection.

Upon completion of this Concours restoration, the car was immediately sent to the Pebble Beach show. The car stumped almost everyone, and as you can imagine, was a total hit amont some of the world’s finest and most-knowledgeable car enthusiasts.

Once it arrived in Washington state, the EMW spent several months on display at the famed LeMay Museum in Tacoma before being sent to Jim’s Classic Garage for some engine tuning and other work.